My Log 268: A trip to Mostar: monument to our modern capacity to carry out outrages as bad as any in the past 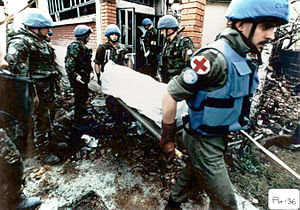 I visited Mostar yesterday, and if I ever needed reinforcement in my view that war is berserk (I don’t need it, actually) I found it there.

Mostar is that beautiful little town, 150 kilometres from
Dubrovnik, in the heart of Bosnia, where, in an act of monstrous cruelty and cultural blindness that we all watched on television, the Croats destroyed a famous bridge that had spanned the river Neretva since 1566, and was regarded as one of the marvels of Ottoman architecture.

As The Guardian remarked in an article published in 2004 when the bridge was officially restored: “The Old Bridge stood for 427 years until a failed Croatian theatre director-turned militia leader, Slobodan Praljak, trained his artillery on the structure in November 1993, when his forces were driving Mostar's Muslim population into an east bank enclave.”

Along with others who collaborated with him in the destruction of Mostar, Mr. Praljak has been in custody in The Hague for some years, undergoing trial before the International Criminal Tribunal for the Former Yugoslavia. This is the tribunal that issued indictments against 161 people for crimes against humanity and the like during this ridiculous war, and the last of these 161 people was arrested last week, 16 years after hostilities ceased. Some 64 of these people have been sentenced, 13 acquitted and 14 trials are still underway. (To plunge into the Web site of this tribunal is to take a voyage into the murky world of ethnic hatred, and to expose oneself to a recital of the follies and absurdities of which human beings are capable.)

The bombing of Dubrovnik is one crime that the tribunal has concerned itself with, and the destruction of Mostar is another. Mostar was said to be the most ethnically integrated population in the whole of Yugoslavia, but the war put a stop to that. At first the Croats fought with the Moslems against an attack by the Serbs, whose leaders had declared that they wanted to unite all Serbs in Yugoslavia under one government. But in the middle of this, the Croats turned on their allies, and began a vicious attack against the Moslems, driving them across the river into the east section of the town, and then bombing their houses mercilessly.

Today, Catholic Croats and Moslems still both inhabit the town, but they live separately, on opposite sides of the river. The Catholics have built a new church, complete with a huge tower that looms over the entire town, and along with the rebuilding of the bridge, the market areas around the bridge have been largely rebuilt too. But the Moslem side of town lags in redevelopment behind the Christian side, which, naturally, has been favored by Western world supporters. I believe the Serb population from before the war was driven out of town, and has not returned.

During the war the city was first attacked by the Yugoslav National Army (JNA), essentially a Serbian outfit, which established control over the town. Within three months, forces of the newly-established republic of Croatia managed to force the Yugoslav Army out of the town. The JNA then shelled the town, destroying a Franciscan monastery, the Catholic cathedral and the bishop's palace (with a library of 50,000 books), a number of secular institutions as well as fourteen mosques.

When the Yugoslav Army moved out fanatic Croat Catholics destroyed Orthodox monastries and cathedrals, and bombed the ancient bridge, for which their leaders are still on trial in The Hague.

We went on a bus tour to Mostar. It took more than five hours to travel the 150 kilometres from Dubrovnik, not because the roads are bad --- indeed, they are beautifully surfaced --- but mainly because the modern Yugoslavia-as-was is now divided into six independent nations which maintain border posts whose utility is beyond the understanding of a simple guy like myself. We passed these border posts six times on the way there and back: it was never clear whose nation controlled the post, and the personnel running the posts appeared to be dressed identically. By peering closely at the small notices posted up one could gather that this post might be Bosnian, this one Croat, but there is nothing like what one has become accustomed to at most border posts, a clearly demarked area between an exit post of one country and the entry post of the next. In fact, I noticed at one post that on the way to Mostar our bus pulled into a long line of buses which were facing in one direction, with a small low hut in front of us through a window of which the drivers had to produce some documentation or other, which had a tiny notice that it was Bosnian, but on the way back the buses pulled up in the same line, except it was facing in the opposite direction, and an identical window in an identical hut seemed to belong to the other nation: the two posts were together, in other words. If this is the only benefit they have received from their war, it can hardly have been said to be worth it.

Nevertheless, the journey was very much worth taking. On the way to Mostar we stoppd at a village that I can only describe as amazingly beautiful. This was Pocitelj, a tiny place on a hill beside the Neretva river (the same one that runs through Mostar) whose population before the Homeland war in 1991 was 900. But this village was founded in the fifteenth century, and came under Ottoman rule for four centuries, during which a walled town was built, testimony to its strategic importance as a defensive position. When the Ottoman rule was replaced by Austro-Hungarian rule the town lost its strategic importance, which fortuitously enabled it to maintain its unique architectural mix. But in the 1990s, once again, Croatian forces bombed and shelled it destroying Pocitelj's sixteenth-century master works of Islamic art and architecture and displacing most of the town’s Moslem population.

Since the war, outside experts in ancient monuments have expressed their concern over the fate of this exceptionally beautiful town and in 1996, thanks to work of the Universities of York and Sarajevo, it was named as one of the world’s 100 most culturally endangered heritage sites. A restoration program arising from that designation has brought about the rebuilding of damaged and destroyed buildings, the encouragement of the return of the refugees and displaced persons to their homes, and the long-term protection and revitalization of Pocitelj's historic urban area.

We enjoyed a luncheon in the Mostar market area, an old-time local dish known as “under the bell” --- meaning lamb cooked under a bell that is submerged in glowing embers, utterly delicious --- served by an old-time waiter in a modest café sitting above the river. Not far away the merchants were just wrapping up their morning at the market, and shops selling tourist trinkets, and for all I know, precious, locally-made artifacts, were crowded with tourists. I suppose it could be said that Mostar has returned to some kind of normalcy --- but the populations appear to be living still at dagger’s drawn, on either side of the river. Mostar is, if anything, a monument to the fact that our modern civilization, with all our knowledge, artistic sensitivity, and ethnic tolerance, is still capable of outrages that rival those of past centuries.