My Log 271: Once again, I stray among the classicists, and am put off when they pander to my depraved tastes 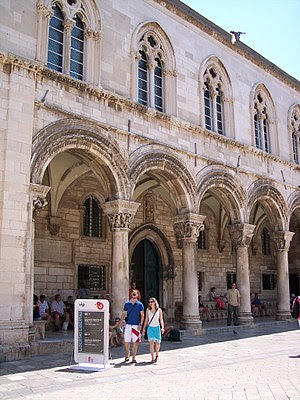 Last night I attended a concert by musicians whom I had reason to expect were among the best in Europe.

There were 12 of these musicians, playing in the open air patio, or atrium, of the Rector’s Palace, a beautiful building constructed in the mid-15th century, damaged later by an explosion, and rebuilt after a huge earthquake in 1667, with
Renaissance and baroque architectural elements. The building was the seat of government when Dubrovnik was a city-state, and a republic, and the Rector after which it was named was an official elected by the Great Council to represent the Republic for a month during which he wasn't allowed to leave the palace at anytime except on government business.

This was held to have fitted exactly the principle of the Dubrovnik republic that is inscribed in Latin over the door of the Great council hall, "Forget private and deal with public business" (a message that we could do with in our own capitalist-controlled times in most countries of the Western world.)

The Atrium is regarded as an ideal location for the chamber music concerts that are held frequently during the Dubrovnik summer festival: indeed, last night I noticed various members of the 12-person group of musicians looking around them in wonderment at their surroundings.

Well, that’s as may be: the musicians were clearly expert on their fiddles of various kinds, and the soloist, a woman cellist called Monika Leskover, was a wonderful artist.

Readers of this site will not be surprised, nevertheless, to know that this music left me more or less cold, since I have no knowledge of classical music, and would, to be perfectly honest, rather attend a concert by my son’s raucous rock and roll band, Grady, out of Austin, Texas. I was not surprised to read that she had been highly spoken of by such luminaries as Mstislav Rostropovich (whose master classes she had attended) and Yehudi Menuhin, but the information that she had performed with three “world famous conductors” (none of whom I have ever heard of), and with four of “the world’s leading musicians” (whose fame has also escaped me during my 83 years) kind of suggested I had strayed into an environment I should have avoided.

Okay, call me a slob. One thing I discovered last night is that classical musicians are at least as self-indulgent as rock musicians: it seemed that Ms Leskover went on and on with her piece from Haydn, which, to me sounded like she was repeating the same phrases over and over, and I came to the conclusion that her piece would have benefited from being cut to the length my rock and roll experience has made more familiar to me.

The group had previously played works from Handel,
Charles Avison, and a Croatian composer called Dubravko Detoni, who was present at the concert, and whose work I thought was the most interesting of the night. He has composed some 130 productions around musicals, books of poetry and radio and TV programmes, and they were, to me, more evocative than the more classical works.

But then, with all this completed, the group launched into a bizarre evocation of what I have always considered the tripe composed by the Beatles, whose rubbishy tunes were disguised (though barely) as baroque compositions. She Loves You, a Hard Day’s Night, Here Comes the Sun? As baroque compositions? Do me a favour, fellers, better that you stick to your last and don’t try to curry favour with slobs like me.

Maybe my uneasiness was caused by the fact that, with a standing room ticket, the only place I could find to perch was on the medieval stone staircase, on to which I was crowded with dozens of others, (who seemed just as uncomfortable as me).

I gotta admit, the audience was enthusiastic, as they should have been before these master musicians. But I was glad to escape with my sanity more or less intact, and my bum bruised, cold, but still functioning. I think.