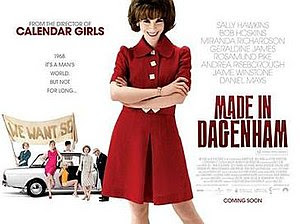 On successive nights I have seen two interesting movies dealing with working class subjects, but movies very different in their approach. Both were set in the early 1960s, but one was French one English, and perhaps that was one of the major differences between them.

The French film was called The Women on the Sixth Floor, and it was a sort of domestic comedy contrasting the mores of a French bourgeois couple with those of the floor-full of upstairs maids who served them, without being seen by them in any real sense for many years.

The English film was Made in Dagenham, a hard-nosed political film about how a group of machinists working for Ford in Dagenham, east of London, decided to go on strike for equal pay for equal work. Both were full of humour, but the humour was quite different in each film, although both had what might be called a soft-core centre allowing good to triumph in the end. But I have to admit I preferred the English film, mainly for ideological reasons.

The French film, directed by Phillippe Le Guay, opens in one of those ancient Parisian apartment buildings that are normally presided over by a concierge past whom even an army would find it hard to penetrate, usually an aging battleaxe with her nose in everybody’s business. This was true in this apartment house, which appeared to be owned by a character expertly played by Fabrice Luchini, married to an idle rich woman who filled her days with trivia of one kind and another. Into Mr. Luchini’s life came a pretty young woman from Spain, come to join her aunt, who is one of the maids living upstairs. Mr. Luchini welcomes her, tells her her predecessor has left, that she earned 250 francs a week (or was that a month?) and he immediately finds a piece of steel behind her affable, smiling exterior.

He pretends he didn’t understand what she was saying, and insisted the pay would be 250. “Four hundred,” she said again, still smiling affably. He promised to talk to his wife about it, and the next day, somewhat entranced by the pretty new maid, comes back with a solution. “You will be paid 400, but as far as the mistress is concerned, you will be getting 250 --- not a word about this arrangement to her,” says the brave bourgeois, and so the arrangement is made.

The predecessor had worked for the family all her life, but when the family’s mother died she could not adjust. Quarrelling with the master, she is given her cards. Monsieur explains her severe loss to the pretty new maid, telling her the old girl was like family. “Where is she now?” asks the new girl. Monsieur did not know. “And yet she was like family?” asks the impertinent one, setting a tone for the mores on show in this film.

The new maid is a model of modernity, she boils his morning egg exactly as he demands it (three and a half minutes, he explains, anything either softer or harder spoils his entire day), she keeps the dishes washed, the clothes ironed, everything turns upward in the household arrangements, and he finds himself attracted to the young woman in a way that seems rather strange to him.

Somehow or other she persuades him to go upstairs to meet the other Spanish women who have been living up there, unregarded, for years, and he finds their toilet is horribly blocked, and orders in a plumber to clear it out. Thus the film gets underway, and the comedy is broad among the working class women from Spain, who seem to have inherited a much more modern attitude to life than the hidebound French bourgeoisie, in spite of having been dragged up under the tyrannical Franco regime. At least these women stick together: one of them has only to send out a call from her window for help and the rest appear as if by magic to wash, dry, vacuum and the like. Eventually the master quarrels with his uptight wife, who doesn’t believe his story that he was invited to dine with the maids upstairs, and she kicks him out, expecting him to return any moment. He moves upstairs into a cubby hole, living with the maids, and suddenly finds himself happier than he could have ever imagined being, as he is alone for the first time in his life, and making his own decisions without any interference from mother, father, wife or anyone else.

Part of the solidarity of the maids comes from their adherence to the rituals of he church, which appear as a joyful inheritance, that rather turned me off, to tell the truth. But eventually monsieur’s beautiful young maid confesses she has an eight-year-old son born out of wedlock, and surrendered for adoption. When one of he maids her aunt says she knows where the boy is, the young woman decides she must return to Spain to be near him. And after surrendering briefly to the romantic advances of monsieur, she disappears, and he is left with no option but to return to his loveless marriage.

Three years pass: and I will aleve it to readers to guess what happens: it is all resolved with delicacy, and most happily.

Well, that’s the French version of a working class dilemma: the British version is rooted in the poverty of he Cockney workers at the Ford plant, women workers who are egged on to demand equal pay for equal work by their shop steward, in a beautiful performance by Bob Hoskins. He confronts the comfortable senior pooh-bahs of the union movement, who call in the striking women and tell them how they should go back to work, and leave it to them to negotiate an increase in wages. No, says the young woman who is discovering leadership qualities as she becomes the spokespeson for the women workers. No, we don’t accept these compromises. We are striking for equal pay for equal work. But that will ruin the Ford company, cry the bosses, echoed by the union pooh-bahs.

As the strike drags on, the plant runs out of the materials provided by these women, and the factory closes. Then the pressure comes on their husbands: will they support their wives? In a pig’s eye they will. They tell their wives to stop all this nonsense and get the factory working again so they can get some money into the house.

The film is excellent as it shows the intense pressures created by strike action. It also ha wicked portraits of the higher-ups who are forced to make decisions about this kind of industrial action: the company executives, under pressure from Detroit; the Labour government ministers, compromising all along the way since they got elected (“I wasn’t running the country then,” as Harold Wilson remarks when challenged by his active socialist minister Barbara Castle with a memory of his policies when in opposition). Anyway, this too has a happy ending. This strike apparently actually happened in 1968, and the victory of the women workers led to the passing of Equal Pay legislation that was quickly followed in other countries, and has helped to transform the situation of working women.

I liked this film very much: one seldom sees serious movies dealing with politics, and when one crops up, one is obliged to give it its due, recognizing that almost all of the media, including films, are biased overwhelmingly in favour of establishment attitudes and practices.