(2) I have long admired Pepe EscobAr as one of the best-informed of foreign corresopondents writing anywhere. His articles in the online Asia Times have brought commonsense and informed insight to Asian affairs for years, Today in an article entitled “Masters of Hate Locked and Loaded” he pinpoints the dangerous lunacy of the American right-wing, and its responsibility for triggering the Tucson massacres.

In the present depressing political environment in the United States, it is something of a comfort to know that many individuals, resisting the current malaise, are writing cogent and brilliantly argued articles of refutation.

Today I make links to several of these articles:

(1) Lawrence Davidson is a professor of History at West Chester University, Pennsylvania, whose analyses of current events are consistently pointed, progressive in tone, and clearly argued. Today he considers the political impact of the Tucson murders, and the responsibility for them, shared between right-wing, hysterical Republicans, and tepid, cowardly Democrats who have confronted violence with mere passivity.
This man is always worth reading. 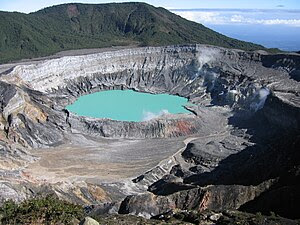 One of Costa Rica's attractions Image via Wikipedia

I have been away from Ottawa since December 20, when I went to Austin, Texas, to visit my son, and thereafter to Costa Rica to visit my daughter.

The visit to Austin coincided with a couple of horrible events in my son’s life, the first being the death by murder of one of his closest friends, formerly a drummer in his band, and one of the sweetest guys you could meet anywhere.

Billy Maddox had retired from the band because a heart condition made it impossible for him to tour, But my son Ben had stayed in touch with him, and become his good friend. Billy lived with his wife in a lovely house in the countryside around Austin. His death occurred when they discovered an intruder in his house who, it turned out, was a neighbour well known to them who, apparently being off his meds, as they say in the US, threw a rock through their door and invaded their house. When Billy spotted the guy and realized he knew him he went to greet him, but was attacked, and by some sequence of events I have not heard explained yet, the end of the affair was that Billy lay dead from a gunshot wound, and the neighbour, too, had been wounded and was in hospital. All that a stranger can say is that if no one had had a gun, no one would be dead.

This tragedy was compounded a couple of weeks later, after my departure, when Ben told me that the lead singer of a band with which he had worked every Sunday night for some years had committed suicide. This is a band comprised largely of old-timers. It is probably one of the great rock-a-billy bands in the world, whose members are delightful fellows, and I can imagine the shock that must have passed through the band members on learning of the tragedy that had befallen their comrade.

Although murders and deaths by suicide happen everywhere, one can scarcely avoid making generalizations based on the American love of guns. This is something that is baffling to the citizens of most other countries, especially of Canada, the closest neighbour of the U.S. We, too, have our share of such incidents, but the U.S. appears to be at the head of the death-by-shotgun list by a considerable margin.

It has been interesting to come to Costa Rica, generally acknowledged to be the most civilized of the republics of Central America, which has succeeded in changing its government by election, without coups or military intervention, for many decades. This is the country that earned itself the remarkable distinction of being the world’s only sovereign state to have abolished its army. That it has retained its constitutional purity for so long surely cannot be unconnected to this remarkable decision. In every other Central American republic --- the catalogue is long ---- Guatemala, Nicaragua, El Salvador, Honduras, Panama ---- violence became almost a way of life, as either a military-style government, or an elite that did not hesitate to use violence to retain its control of the political situation gave the region a bad name for instability and violent repression.

This has been all the more remarkable in that, for many decades, these tin-pot dictators and insanely violent militias were supported through thick and thin by the great propagandist for democracy, the United States, who, in fact, trained their violence-prone elites, the purpose being to have in power in each of these states an elite that would defend the interests of American companies. Here it was that the phrase “banana republic” was coined to describe the most contemptible of governments, usually of small helpless countries dominated by the United States.

Today Costa Rica seems to be well within the American orbit, depending for its income to a large extent on American and Canadian tourists escaping from the northern winter. Whole sections of the country, esecially along the coastlines, seem to be populated by what are known locally as Ex-pats (namely, Americans), many of whom are rich, maintain expensive homes and hotels, and generally have transformed small communities to take care of their needs. Thus one is never far from a gym with high-cost equipment, necessary for the perspiring American visitor, or the local health-food store, to take care of their many New Age fads, and so on. The country has regulations forbidding foreigners from working, although they are permitted to establish and own businesses, a fine distinction that makes it difficult for them to staff the businesses they have founded.

Still, the way of life does appeal to your laid-back types, many of whom are Americans, of course: so coastal villages are full of young men with long (or shaven) hair, long shorts, and surfboards, taking advantage of the big seas that crash into the Pacific coast.

My daughter, when she first came here, found herself in one of these ex-pat communities on the Pacific Coast, but was repelled by the drug-infested nature of life there, and withdrew. She has recently established in a nice little town called Samara, most of whose inhabitants are Costa Ricans who speak no English. Unlike her father, tone-death to foreign languages, my daughter picked up Spanish effortlessly without a single lesson, and she seems to be thriving in the local heat.

Just a few reflections on the meandering travels of an old man….

Link of the Day: Why Washington Hates Hugo Chavez, an article in Information Clearing House by Mike Whitney. In Chavez's Venezuela the basic needs of ordinary working people take precedent over the profiteering of cutthroat banksters. Is it any wonder why Washington hates him?

(“The details of Chavez's efforts have been largely omitted in the U.S. media where he is regularly demonized as a "leftist strongman" or a dictator. The media refuses to acknowledge that Chavez has narrowed the income gap,eliminated illiteracy, provided health care for all Venezuelans, reduced inequality, and raised living standards across the board. While Bush and Obama were expanding their foreign wars and pushing through tax cuts for the rich, Chavez was busy improving the lives of the poor and needy while ending off the latest wave of US aggression.

(“Washington despises Chavez because he is unwilling to hand over Venezuela's vast resources to corporate elites and bankers. That's why the Bush administration tried to depose Chavez in a failed coup attempt in 2002, and that's why the smooth-talking Obama continues to launch covert attacks on Chavez today. Washington wants regime change so it can install a puppet who will hand over Venezuela's reserves to big oil while making life hell for working people.”)

Link of the Day: January 1 2011: A warming piece of info to start off the year: Juan Cole outlines the Top 10 Myths about Afghanistan. And there is an eleventh: what the hell is Canada doing there?