My Log 498 Jan 7 2015: Journey through Dalmatia --- 5: Diocletian, Roman emperor whose retirement palace in the city of Split is today the cosmopolitan centre of the Adriatic

My preferred method of travel, of visiting a place, is just to mooch about, ignoring the churches (I never visit churches, believing religions are the work of the devil) and museums, and concentrating instead on those sidewalk cafés from which one can  watch the world go by. I have to confess it is not the ideal way to see a city like Split, a metropolis of 200,000 people, which regards itself as the cosmopolitan centre of the Adriatic. It is a city that can boast of having already had, in its original location five kilometres from the present city, a population of 60,000, when it was first mentioned in history more than  2100 years ago. 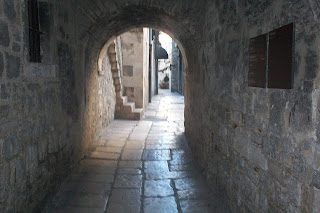 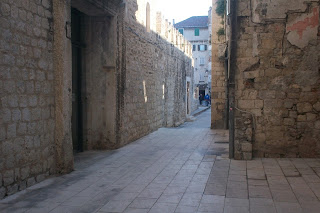 Two shots of many taken by myself and my partner, Sheila, inside Diocletian's Palace, showing the excellent restoration of the walls

The present city’s claim to historical fame rests on Diocletian’s Palace, a huge affair which was built in the fourth century AD by a local boy made good, Diocles, or to give him his full Latin moniker Gaius Aurelius Valerius Diocletianus,  a Croatian who rose to be Emperor of Rome, and chose to return home to live after his retirement.

Everyone talks airily about  Diocletian’s palace, and yet I never met anyone in Croatia so far who talks about how it was that a man of such modest birth in an outlying territory of the empire, managed to accede to the halls of supreme power. So I have looked him up and since I found the account of his life and work in the Encyclopaedia Britannica so interesting, I have taken the liberty of reproducing some passages from it in the hope that it may interest anyone who reads this.
First of all until he acceded to power, he lived most of his life in army camps. He came to power because of his position in the Roman army, and not without performing some of the skulduggery normal to his times: for instance, apparently killing one of his rivals.  Once in power, however, he appears to have been mainly interested in reviving the Roman empire from its anarchistic and degenerated state, and with that object in mind he shared power with three other men on whom he also bestowed the title of emperor. As the Britannica writes:
“All his reforms led toward a kind of centralized and absolute monarchy that put effective means of action at his disposal. Thus, Diocletian designated the consuls; the senators no longer collaborated in the making of laws; the imperial counsellors (consilia sacra) were distributed among specialized offices, and their functions were strictly defined so that the power of the praetorian  prefects  (personal bodyguards to the emperor) was limited; the specialization of administrative work grew; and the number of bureaucrats increased. This was the beginning of the bureaucracy and technocracy that was eventually to overrun modern societies.”
In other words, he was a modern-minded kind of fellow, this Diocletian. Further:
“A conservative, Diocletian was concerned with the preservation of the ancient virtues: the obligation of children to feed their parents in old age; of parents to treat their children justly; of spouses to respect the laws of marriage; of sons not to bear witness against their fathers, or slaves against their masters; and of private property, creditor’s rights, and contract clauses to be protected. He forbade the use of torture if truth could be discovered otherwise and encouraged governors to be as autonomous as possible.”
And, finally, in summary of his achievements, the encyclopaedia writes:
“He may be accused of several things: of having been cruel, but his harshness was not the act of deep-seated brutality; of being miserly, but this miserliness was inspired by the desire to obtain resources for the state; of cutting a slightly muddle-headed, visionary figure, but these were the traits that led him to reflect on better methods of governing an immense territory; of having paved the way to bureaucracy and technocracy, but this was done with greater efficiency in view. Personally, Diocletian was a religious man. No doubt he did not manifest any unusual piety, but he always thought that the gods of the emperors governed the world. He exercised an absolute, divine right monarchy, and he surrounded it with majesty.”

The main fault held against him nowadays is that he persecuted the Christians, his persecutions giving rise not to their decline, but rather to a strengthening of their convictions. For myself I could wish that he might have strangled this religion at birth, so we would not be confronted with its numerous mistakes, and constant wars, and heavy hand on the personalities of individuals right into our own day. We might well have been better off without it, But there you go, we are stuck with what history has handed down to us.

Diocletian abdicated as emperor in 305  AD, after 21 years of power, and died, more or less in obscurity, six years later. Thereafter the palace, as it was called (though it was far more extensive than a mere palace) lay empty and abandoned for several centuries and was used only occasionally by, for example, some local people seeking shelter there from invading Croats. But from the seventh century, the palace has been used as a place of residence and business. It was virtually unknown to Europeans until in 1764 a Scottish architect, Robert Adam, and a French artist collaborated on  a book celebrating its ruins, a book whose influence later, for the first time, brought measured drawings into the design vocabulary of European architecture. At one time the palace housed as many as 9,000 people, but today, although there are many shops, restaurants and hotels within the walls, that has been reduced to 1,000, and there are now severe restrictions on what can and cannot be built within the walls.

Centrepiece today is the so-called peristyle an elegant open space that leads to the former emperor’s quarters. I will have no difficulty remembering this name, because I had a booking in one of the hotels, the Peristel, but when I arrived I found I had mistakenly made the booking for two nights later than the day we arrived, ready to take up residence. At my age, this is a humiliating mistake to make, suggesting the onset of a mild dementia. I comforted myself by remembering that the last time I made that sort of idiotic mistake had been when I was a young reporter in my home town of Invercargill, New Zealand, more than 60 years ago, when I was hauled on to the editorial carpet because I had reported that an accused person had pleaded guilty to murder, when I knew perfectly well that he had pleaded not guilty. What I had done was to omit the word “not” in my copy, and thereafter had failed to notice its admission when I reviewed my copy.

In exactly that way, I had booked two nights for Jan 1 and 2, had approved the booking when I made it, and yet had it in my mind --- never a doubt entering --- that the booking I made was for Dec 30 and 31. I know I will not last another sixty years, but I will never forget, for however long I may live,  the name of the hotel, the Peristel. Fortunately for us, they were able to find  a room for us on each of the two nights of our stay, but the experience --- I had to pay a hefty penalty for cancellation of my original booking --- has taught me that I have to check, and recheck my copy from here on.
Like Zagreb, Split is the site of an immense, and immensely impressive statue, at least three times the size of an ordinary man, which has been moved around from place to place, even removed during the Italian occupation of the town during the Second World War, but has been re-instated in a position not far from one of the gates. This statue is of a man known in history as Gregory of Nin (or Grgur Ninski) by dint of his having been bishop of Nin from 926 for three years. Exceptionally, in those days, he opposed the reigning Pope, and dedicated his main efforts to replacing Latin in the church services with the local Croatian language. He did not last long, having failed in a struggle with a neighbouring bishop, leading to the abolition of his bishopric. The sculptor, Ivan Mestrovic, is also a man of interest, widely recognized as one of the greatest sculptors of Europe during the days of such others as Rodin, Brancusi, Giacommetti. A village boy from the Dalmatian hinterland, he was spotted as a remarkable talent at the age of 16, educated in Vienna, and had become a sculptor of note by the First World War. Thereafter he moved back to the then-Yugoslavia, but during the Second World War he was arrested by the Ustache fascist government of Croatia, and after the war he moved to the United States. He was invited to return to Yugoslavia by Tito, but refused to live in a Communist country. He sent many of his works back to his home country, however, although taking up permanent residence in the United States. He died in 1962 at the age of 79.

We ended our 10-day tour of Dalmatia by sitting overlooking the wharf in Split, a busy port whose large ferry boats service the many islands in the vicinity.  We wandered around the Palace one last time, noting the curious juxtaposition of new buildings nestled in beside the ancient walls, of washing hanging in front of elegant buildings, of the various boutique shops, excellent restaurants and comfortable hotels now accommodated in this ancient shell.
We had expected the bus home to Dubrovnik to be crowded: but, as elsewhere, we are almost the only passengers, once again. The journey home was memorable only because a young woman approached me and said she knew me from Ottawa. The next day we introduced her to the wonders of the Gaffe --- one of the three Irish bars in Dubrovnik --- where a new owner has vastly improved the quality of the food on offer. Like so many other young people, traditionally, she was wandering around Europe, taking advantage of any good airline deal she could find.

A good place to end this series of articles would be where I started, with recognition of the ever-presence of the past when one travels in Europe. Here is a transcript of a wall plaque we came across in Split, testifying to the intense life lived in ancient times, in that very place on which we stood:

"Julius Nepos (430-480) was a Western emperor (474-480). During the last stage of the Western Roman Empire he reigned. At first, over Italy and adjoining areas held by the Western Empire. As of 475 he had influence only over Dalmatia, having been deposed and replaced with Romulus Augustus (in effect if not in law) in the rest of the western remnant. The Eastern Roman Empire continued to recognize Nepos as rightfull Western emperor to the end of his life. He was murdered by his soldiers in Diocletian Palace on the April 25 of 480. Nepos was therefore either the next to last or the last Western emperor depending on how one looks at that matter."