My Log 496 Jan 6 2015: Journey through Dalmatia --- 3: Piran, a delightful little town in the northern Adriatic, untrammelled by mass tourism

Overview of Piran, Slovenia from its town-walls (Photo credit: Wikipedia) 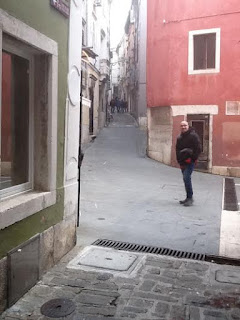 A typical street in Piran taken looking out from the street our guest house was in. A small town, made up of streets like this.

In our effort to escape from Christmas, we took refuge in a small town, Piran, on the tiny piece of the Adriatic coast that has been allocated to Slovenia. To tell the truth, the disposition of this area of Istria --- which itself is a sort of undefined region at present divided between three countries, the third being Italy ---  is still undecided, for it is under an extremely detailed and heavily argued arbitration between Slovenia and Croatia.
However, they did celebrate Christmas in Piran, but not very vigorously, for even on Christmas day itself stalls were set up in the central square for a few modest artisans to offer their wares. This square was overhung temporarily by an enormous electrically-lighted violin, in honour of the town’s number one ancestor, Guiseppe Tartini, after whom the central square, and many other places in Piran,  is named. Tartini was born in Piran in 1692, died in Padua in 1770, a composer and one of the greatest violinists of the eighteenth century,  celebrated also for having  owned one of the original Stradivarius violins. 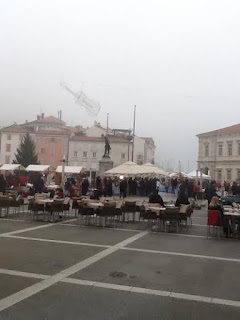 As part of their seasonal celebrations, the residents of Piran erected the large violin shown here overhanging the statue on Tartini Square in honour of their favorite son, Guiseppe Tartini, regarded as one of the premier European violin soloists of the eighteenth century. The violin is dimly visible in this daylight photo, but at night, lit up, it made a very striking image.
Below: Another  shot showing the extremely tight-packed nature of Piran's streets and buildings. The little sculptured head on the building on the right is typical of much Italianate architecture, and testifies to Piran's Italian heritage.

Leading into Tartini square are a multiplicity of narrow streets, inaccessible to motor vehicles, which are forced to use only the broader roadways that surround the town, built on a small peninsula which it entirely fills. Even these roadways carry as many pedestrians as vehicles, so there is about the town an irrevocably  leisurely air that seemed to pervade everything that happened there during our five days of residence. 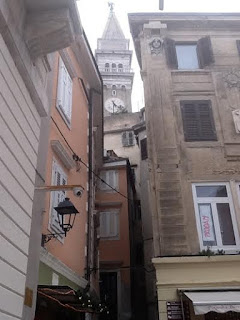 I had booked far in advance --- I first read about the town in a travel article in the Globe and Mail  of Toronto --- and the accommodation that had caught my eye was called the Pacha Mama (meaning Mother Earth in an indigenous language of Latin America) Guest House Pleasant Stay, to give it its full name. It turned out to be hidden away, only a few yards from the central square in an old building which, inside, had been totally revamped by its Swedish owner. We arrived after dark at the end of a long bus ride from Zagreb, and our first contact with the little town  was extremely agreeable. Walking along the harbour front, I asked a passing man if he could direct me to the street in which the guest house was located. He indicated it roughly enough, and we set out to find it. A few minutes later the man I  had asked came running back to join us, carrying his GPS and insisting on accompanying us to the very door, where an agreeable young man called Luka was awaiting our arrival.
Luka told us that, since we had booked for five nights, and there were no other guests, they had decided to offer us a larger room on the fourth floor, if that did not inconvenience us.  Four or five years ago, we would have jumped at the chance, but those five years have taken their toll of us so that the prospect of lugging our cases up four flights of stairs daunted us, and we rejected the offer.  Cheerfully enough, Luka installed us in our booked room on the first floor, but it was very small, and we decided to take their offer. So up we went to find a  much larger room under the eaves, and with all the modern technology Sweden could provide. For example, the bathroom floor was heated by a mysterious apparatus on the wall, which I never did succeed in figuring out. Below that was an even more daunting set of buttons regulating the room heat. It said the ambient heat was 29 degrees C, far too high for overnight comfort, and it never varied although we did get an accompanying button down to 17 degrees without making any discernible difference to the temperature. Even the lighting held its mysteries: maybe simple for the Swedish mind, but a bit much for a couple of old codgers from an earlier generation. Another unusual aspect of the place was that although Luka turned up for three hours the following morning, at noon he disappeared, and for the rest of our time there we virtually had the whole building to ourselves. After all it was the out-of-season holidays, and it was enjoyable to know that whatever noise we made did not discommode any other guests.
Although it is difficult to recall exactly what we did while in Piran, the little town never did start to pall on us, and I have no hesitation in recommending it for anyone looking for a relaxing and quiet holiday.  It was delightful walking along its interconnecting narrow streets, although one had to be careful, because the cobblestones are extremely ancient, and irregular, and could be classed as traps for the unwary elder. While the architecture wasn’t remarkably beautiful, its coherence was always pleasing, and one could tell that a serious effort had been made to preserve in good condition the inheritance from their long past.
As I remarked in an earlier piece, one is never far from the past in this area of Europe.  Istria, of which the Piran peninsula is part, was originally inhabited by tribes called the Histri, made up of farmers, hunters and fishermen, who were regarded by the Romans as fierce pirates, whom they took a long time to conquer.
They became part of the Roman empire in 177 BC, and were so ruled most of the time in the next thousand years, although modified from time to time by Byzantine control, and incursions of Franks and Slavs. I discovered from the tourist books that both Slovene and Italian are recognized official languages in this part of the country, which is a recognition of the varying ethnic make-up of Istria --- sometimes with Italian majorities, later with Slovene, and always with a good healthy mix of ethnicities. In 1945 91 per cent of the town’s people were Italian-speaking, but this changed radically after 1947, when the Independent Territory of Trieste as it was called, was incorporated into Italy and the southern part was granted to Yugoslavia, leading to an exodus of Italians.
Slovenia is a small country of almost  2,000,000 inhabitants, and a number of locals indicated to us that they could hardly expect to win the long-running argument about the borders in the Bay of Piran with the more aggressive and larger country of Croatia, although they were living in hope. 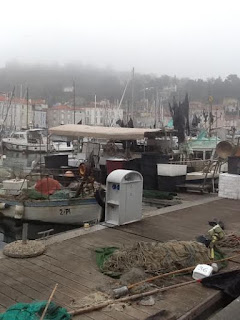 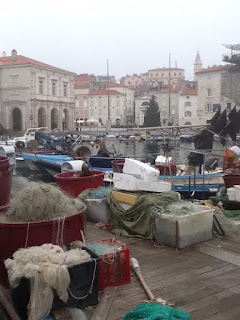 Piran is said to be one of Slovenia’s primary tourist attractions, but the many piles of fishing nets on the wharves indicated that this is one small town that has not gone overboard for tourism unlike its neighbour two or three miles along the way, Portoroz, which appears to have attracted all the expected horrors that one can expect with mass tourism (including four casinos, probably the kiss of death).

These three pictures show Piran's busy little fishing port, with their boats carrying the black marker flags to indicate their nets, and the piles of nets ready for action

I should mention they have several excellent restaurants: we had one amusing experience when we entered a small coffee house late at night and asked for a coffee, indicating also what looked like a chocolate bar. “It is very hard,” he said, indicating the chocolate bar.Never mind, I said, I will have it. “It’s very hard,” he said, shaking his head, almost insisting we not buy it. I persisted, confidently bit into it, and made as little impression on it as if it had been a stone. As he said, it was very hard. Eventually I did manage to make an impression on it, but the danger of cracking one of my few remaining teeth was always evident. Still, I managed to get it eaten, and asked the young man what it was called “Figaro,” he said, grinning from ear to ear, “hard, very hard.” A chocolate bar called Figaro?
Finally, we kept returning to the same restaurant called Ivo, on the waterfront, one of the pleasantest and best restaurants we had struck in quite a long time. There we were served by an absolutely delightful waiter, an older person, a lifelong waiter, who took care of a large room, never made a note of the dishes ordered, never made a mistake, and even remembered the next day what he had served you the night before. I asked him his name. “Marino,” he said, “Sam Marino,” and laughed.  Later, I thought about it: I am almost sure he said San, not Sam, Marino, indicating the small country, one of the smallest in the world, which exists almost opposite Istria on the Italian side of the Adriatic, and which could almost be said to be a competitor with Piran for the tourist dollar.  Just the kind of joke the old guy would make
.