My Log 310 July 23 2012 The motor-scooter, still ubiquitous in Europe, and the source of endless memories of postwar-holidays. 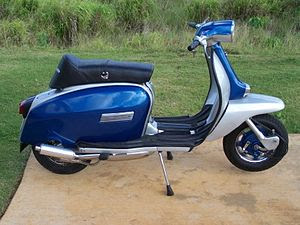 English: Lambretta GP200. (Photo credit: Wikipedia) As far as I am concerned, the peak age of the motor scooter was the mid-1950s, when the top speed was 30 mph, or 34 while drifting down a steep hill.

I know supposedly improved models later exceeded 100 mph, but I take leave to believe these were a different type of machine that must have borne little, if any, resemblance to my dear old Doppo around which my wife and I journeyed around Europe for three months in 1954.

I have been driven to these comments by the ubiquity of the motor scooter in Dubrovnik, where I am currently staying. They are everywhere: one cannot go for a walk without having to find a way through the rows and lines of parked scooters, parked on the side of steep streets, where no one could possibly find a space for a car. Thus it seems that most young persons here have a scooter, even if they have a car, because only the scooter will help them get around as quickly as they want, and enable them to find a place to park.

I am not a man who falls in love with a machine of any kind, but I confess I came very close to it in 1954, when we decided we had enough money, 150 pounds, to process up from the tandem bicycle on which we had toured France in 1952, a mode of transportation, the only one available to us at the time, that cost only 15 pounds. All it took, as we looked around the sales room, was one look at the sleek, beautiful lines of the Lambretta to know that we simply had to pay out the few extra pounds over what we could have bought the chunkier Vespa for. Once we learned to ride it, and got our licence we took to calling the little machine Doppo, under the mistaken misapprehension that the Italian name for the motor scooter was Doppolino.

Never mind that, as far as I was concerned, the machine was a miracle of Italian engineering genius. Today I have looked up the Internet for accurate information about the provenance of the scooter. Disappointingly, its origin was in a scooter manufactured in the United States and transported to Europe for the use of troops during World War II. But that was only the germ of the idea for the final Italian product. It was the Innocenti engineering firm of Milan that designed and manufactured the beautiful Lambretta (named after a small stream that ran close to the Milan plant), that became a totally new concept in city travel if only because it was designed to allow women in their skirts to ride and drive it, because they no longer needed to be astraddle the bike’s body. In addition, their clothing was protected by the elegant sideguards that enclosed from the grime and dirt associated with any engine. Designed for two people, the machine was a heaven-sent answer to the problem of post-war Europeans, who did not have the money to buy a motor car, but wanted something quicker and as mobile as a bicycle. The Italian firm of Piaggio manufactured the rather less sleek and beautiful, but considerably cheaper Vespa --- and between them these two machines filled the streets and roads of postwar Europe and provided the basis for a rapidly changing European lifestyle.

Personally I am a man who never has and never will understand how an engine works, but that didn’t matter in relation to the scooter. I discovered during our trip around Europe that the machine would clog up and stop unexpectedly from time to time. No problem --- all I had to do was take the carburettor apart, a simple task, blow on it, put it together again, and away we would fly at our 25 to 30 mph. Marvelous: I still call every success I have in getting a stalled machine to work “my carburettor trick.”

But consider the miracle of what the scooter allowed us to do. I assure you that what I am about to describe is what actually happened, unlikely though it may seem in these high-priced days.

We took a three-month holiday around France, Italy, Germany and Switzerland at a total cost, everything included, of 100 pounds. equivalent at that time I think, to about $250. We camped everywhere, of course, and in those days there were big campgrounds which did not require reservations or foresight, in the very centre of major cities. For example, we camped in the Bois de Boulogne in Paris, in the Villa Glori in Rome, in a similarly well placed campground in Florence, and so on. The charge for the night was just a few cents. We carried a huge bag into which we stuffed the few clothes we needed, maps, and a wide variety of books we brought along to allow us to while away the leisure hours. Prominent among these was a huge index of every camping site in France, which --- and I certainly hope this is still true --- proved to us that every village in the country kept a campsite with washing and toilet facilities.

Years later, when we had small children and a car, and the seaside had become clogged with huge tent cities of campers, our adopted strategy was to get a place in one of these village campgrounds ten kilometers inland, usually in some idyllic field with cows munching away at the end of the field, and butterflies flitting from plant to plant with wild profusion, but close enough to the coast to allow us to swim whenever we felt like it.

All along our way, which was on smaller roads, not the super highways that were developing, especially in Germany, we discovered fruits of various kinds, usually blackberries, growing in wild profusion, that we could pick and carry with us to be eaten with cream in the evening. And when it was all over I was able to calculate that during our month in Italy we had lived on pasta that cost us an average of four cents a day. Thus when we finally made it to Paris on our way home we had enough money left over to enable us to splurge on various wonderful Parisian shows, whether on the Left Bank or Montmartre I cannot now remember.

We certainly did not stint on what seemed to us at the time to be the obligatory star-struck tourist-gazing. We saw Chartres cathedral, St Mark’s Square in Venice, we visited the Venice Biennale, where the nations of the world, including Canada, show off their art works, and we retain memories still of the room full of paintings of desperate Italian peasants done by the superb writer, painter, anti-fascist, doctor, and later Communist deputy in the national legislature, Carlo Levi, whose book, Christ Stopped at Eboli had already provided us with an unforgettable portrait of the impoverished life of southern Italy in the 1930s when he was exiled there because of his political activism. We visited the Vatican, the birthplace of St Francis in Assisi--- we actually fell off our scooter while trying to negotiate the winding, steep road from the village of Assisi up to the campground, the only time I can remember that Doppo stalled because unable to handle the terrain.

Ah! Happy days! When we could take a holiday that was within the means of even the most restricted pocketbooks. Lucky was I to have experienced it all.