My Log 299: A weekend subject to the CBC’s (right-wing) commentariat: why are we subjected to this? 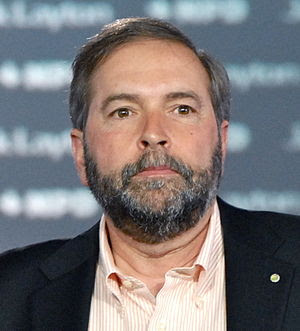 I spent the weekend watching the NDP leadership convention, and marveling at the implacably right-wing tone of the CBC’s elected commentariat.

As I said in an earlier post, I voted for Peggy Nash, on the grounds she was the most left-wing of the candidates, with a local second for Paul Dewar, a nice fellow, and Thomas Mulcair third. So, apparently, by the third ballot, my vote was cast for Mulcair, and I was hoping he would win it. I watched half of it on CPAC, anchored by the plodding Peter Van Dusen, and the CBC, for the first day under command of Evan Solomon, and for the Saturday orchestrated by the CBC pillar of the establishment Peter Mansbridge.

One thing I noticed immediately about Mansbridge that many others may not have noticed was that he was allowing himself many jokes, sardonic in tone for the most part, about the whole enterprise, as if the NDP was not really something to which so notable a figure as Mansbridge should lend his authority. I never remember ever hearing this tone from him before, certainly not in the many leadership contests for the Liberals and Tories that I have heard him performing.

So that was a slightly jarring element, not noticeably compensated for by the fact that every hour or two he seemed to feel the need to straighten up and fly right, as it were, pulling himself up and trying, as he put it, “to see things in perspective.” At these moments he tried to give an objective overall account of what we had been watching, whose seriousness made its absence in his previous behavior all the more striking.

Mansbridge was presiding over the full range of what I can only call the CBC’s Commentariat, that phalanx of mostly conservative commentators that they push at us night after night, week after week, month after month. The only one missing was the hapless Kevin O’Leary, the uber-conservative millionaire entrepreneur with whom the CBC apparently has been conducting a passionate love affair ever since they heard him pronounce over and over on Dragon’s Den that nothing matters but money, only the money counts, where is the money, and how can I make money out of this?
So entranced were they by the revelation of this constricted view of life that O’Leary began to crop up on all sorts of programmes, such as the Lang and O’Leary Exchange, others whose names I have forgotten, and the peculiar exercise in colonialism, Redemption, Inc, in which he decided to pick half a dozen ex-convicts, and give them a second chance, as the programme put it, by offering $100,000 (“of his OWN money,”) to whichever of them could convince him they had the royal jelly of entrepreneurship. Each week, the culminating sequence was surely one of the most peculiar ever screened by the CBC --- a sequence in which, having chosen his failure, O’Leary shuts himself in a room with the guy (or gal) and lectures him or her like a district commissioner in the old colonial empire days.

Well, thank heaven, O’Leary didn’t appear at rhe NDP convention. But all of Mansbridge’s other pals did: the so-called Issues panel, with its relentlessly establishmentarian bias; the Insiders, some political operatives who purported to tell us the unvarnished facts about real politique; and then some of Evan Solomon’s pals from the Power and Politics sessions on the late afternoons of every day. As this paragraph might suggest, palsmanship is the prevailing mode of CBC political broadcasting.

These latter were particularly objectionable in the circumstances, especially one called Ian Capstick, a baby-faced political operative, formerly employed by the NDP apparently, whose fatuous opinions about the quality and value of various speeches was forced down our throats for reasons that remain obscure to me still. Why the hell were these people constantly telling us what they thought? Are we idiots that we cannot be trusted to watch proceedings, judge them, and make up our own minds?

Particularly egregious were the comments on Thomas Mulcair’s final speech: quite misleading in their emphasis, and judged according to some standard imposed by these commentators that probably no one else shared.

On CPAC Van Dusen and his colleagues kept taking phone calls from people watching the programmes, many of whom commented on how refreshing it was to have the proceedings straight, without the intermediary of this horde of doubtful commentators provided by the CBC, and subtly designed, as almost all political programming on the CBC is, to denigrate anyone left of centre.

CPAC by Peter Van Dusen of a history of the NDP, screened just after the result was announced, with particular reference to the work of Jack Layton, a documentary in which he leaned heavily on the well-informed and particularly interesting comments of James Laxer, who might have introduced a note of realism into the CBC’s coverage, if he had been asked).

Anyway, we came through it all. Some people stood out heroically, notably Charlie Angus, the NDP who has been such an effective defender of the people of Attawapiskat. And there were some memorable moments: while the commentariat droned on about how tough it was going to be for Mulcair to repair the damage caused by the election, Mulcair himself was embracing Libby Davies, deputy-leader of the caucus, and announcing she would remain in the same position, even though she supported one of the other candidates. Thank heaven for that: Libby is one of the ornaments of the House of Commons, a great lady and an effective MP.

Now, all I am hoping for is that Mulcair will chew up and spit out Stephen Harper over the next three years, and sweep into power in the next election. Don’t bet against it.