My Log 23: Two weeks in Croatia: a remnant of the old Yugoslavia after suffering a nationalist war 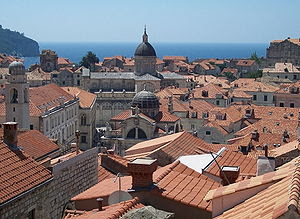 I have just spent two weeks visiting a friend who has lived in Croatia for nearly 40 years. It was my first time in the country --- having been denied a visa to visit Yugoslavia in 1954 when my passport carried the deadly word “journalist” ---- and I confess the impact of being in this country that has been torn apart by unreasoning, pointless nationalisms was rather unsettling.

What caused the Yugoslavian war? Is a rather difficult question to answer. But In Croatia they seem to have no doubt it was caused by an outburst of Serbian nationalism, whose intention was to create a Greater Serbia over the entire territory of Yugoslasvia.

What resulted from it is a mishmash of national borders so that one can scarcely move 10 kilometres from Dubrovnik, where my friend lives, without confronting the need to cross a border into neighbouring Bosnia. People I met referred constantly to “the war”, meaning their civil war, in much the same way as we still refer to the Second World War. But although their conflict was smaller, it was still a real war, and Dubrovnik, a gloriously beautiful little medieval town on the Adriatic coast, was bombed almost to smithereens by attacking forces.

The war was brought to an end some 15 years ago by the so-called Dayton Agreement, establishing separate republics of Bosnia, Croatia and Yugoslavia (Serbia, in fact). Bosnia is divided into a Bosnian-Croat federation and the so-called Serbska Republic, which controls 49 per cent of the state, but which does not, apparently, have control over the state’s borders.The entire war was complicated by differences between various religions, Catholic, Orthodox and Muslim.

More than a million people were displaced in the war, partly by violence and partly by ethnic cleansing, as aggressors captured and burned towns and villages, and forced certain populations to relocate.

Well, this isn’t the place to rewrite all this detail about the settlement, but rather to report on my friend’s reaction to the new arrangements, after living with them for so many years. In her view, “I am so glad to have been here before, when life was so relaxed, when people had a real sense of solidarity and of the collective will, when people would burst into song on the buses, and join to walk the streets singing and dancing. It was beautiful.” In those days, when there was no real competition, everyone had a chance to follow his or her talents, the educational levels (which her children enjoyed) were much higher even than in class-bound nations like England, even actors and artists were provided with a reasonable living and were not under the stresses since introduced by capitalism.

As soon as the agreements were signed, the IMF was introduced, and the new government was ordered to privatize everything, with the result, according to one informant, that “Croatia today owns nothing, everything is owned by foreigners.” My friend said, if you ask people the question, is it better today than before, most people will mutter, “better before.”

Dubrovnik, largely destroyed by the war, has been rebuilt, and is today a city given over entirely to tourism. It is remarkably beautiful, a city of red roofs over white stone houses and buildings, whose narrow, stone-pavemented streets are kept incredibly clean, and in large parts of which no traffic penetrates. You cannot go far in Dubrovnik without climbing hundreds of steps, but my friend deplored the fact that the wide variety of services once available --- barbers, tailors, merchants, shoemakers, fishermen, fruiterers and the like --- have been replaced by a plethora of shops selling only T-shirts to tourists, T-shirts manufactured, for the most part, in China.

On the other hand, as a resident of the central city, and a pensioner, she has free entry to concerts, cinemas, ferries and a wide variety of services for which in our cities we have to pay through the nose (to such an extent that many of these services are in essence denied our impoverished aged).

In one burst of eloquence my friend described a holiday she had taken in the days before the war, to Bulgaria, and how wonderful it had been, how carefree and relaxed had been the Bulgarians, how spiritual and culture-loving they seemed as one moved among them --- it was an altogether different version of life under Communism from anything I have ever read in our public prints, and it came from someone who knew the Western world well and had a basis for comparison.

Today my friend keeps closely in touch with the world mainly through the BBC news every morning, and such programs as Hard Talk, in which various international personalities are grilled mercilessly by an interlocutor. She is also extraordinarily well-read, keeps up to date with the latest books --- had no trouble identifying Life with Pi, for example, and had already read the three volumes of the Swedish sensation, The Girl with the Dragon Tattoo--- and she reads every week’s edition of The Guardian Weekly assiduously from cover to cover.

She has three grown children, two of whom having been educated in Yugoslavia, are still living there, surrounded by their own children, all of whom, although still thinking of themselves as in some sense English (although their grandparents were once regarded as Canadians), nevertheless identify with the Croatia that has given them their primary language.

A fascinating experience indeed, to pass some time in this small country, still trying to qualify for membership of the European Community, and to get a sense of the respect given by its people to their national poets, as well as to their contemporary writers, artists and historians.

The generally right-wing tendency of Croatian leaders traditionally was indicated by the fact that memorials to the heroes of the Yugoslavian resistance who drove the Germans from the country in 1945 --- Tito’s Partisans, who contested the country with Michailovich’s right-wing Chetniks ----- have been removed from the streets, to be replaced with statues of heroes from ancient times.

The single institution that made the most impact on me was a museum of war kept by a young New Zealander. He was featuring a superb exhibition of pictures taken by a brilliant Spanish photographer of the Yugoslavian wars, and the permanent exhibits, of earlier wars, were of such quality that, as I remarked to the curator on leaving, one could hardly see the exhibits without remarking, “Never again.” This museum did not glorify war in any of its aspects: its focus was to establish that war is, in the last resort, the final refuge of scoundrels who should never have been admitted to government.