My Log 251: The world of the traveller today: mass tourism, or luxury tourism, and its deleterious impact on the human environment. 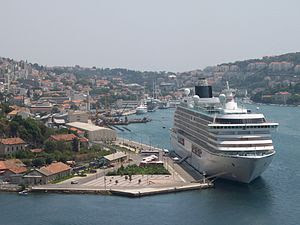 Dubrovnik, Croatia: the mass tourists arriveI have done quite a bit of travelling in the last two or three years, and have begun to develop a stronger than ever distaste for the impact of mass tourism on the human environment.

First, on a visit to my home country of New Zealand, I found evidence that the luxury tourism business into which New Zealand has now slotted itself, has reduced what was once an agreeable, modest little country of mostly small towns, into a major rip-off place. This was later confirmed by a British Rugby writer, Peter Bills, of the Independent, who had exactly the same feeling about it, after many trips. And it has been reconfirmed by the reports of the extravagant prices being charges by many operators for the coming Rugby World Cup, the most recent of these, unless my memory betrays me, suggesting that one operator is charging $15,000 a night, or something equally ludicrous.

At the moment I am on my second visit to Dubrovnik, in Croatia, a small, walled city, extremely beautiful, but one that after being more or less restored to its full glory following Yugoslavia’s disastrous wars of the 1990s, has now been completely taken over by the tourist industry, not so much just luxury tourism, as mass tourism.

Not a day goes by without the arrival of some cruise liner, which shuffles its passengers ashore in tenders, disgorges them in one or other of two harbours, and then sends them marching off around the town under the guidance of guides who hold up signs with numbers and languages to indicate where each tourist can find his proper place. These guides, who do presumably know a lot about the city and its history, pause on the streets from time to time as they go through their spiel. They are under strict orders to perform certain functions, to show their packs of people certain notable landmarks, and at each landmark they have an allotted time, beyond which they cannot dare venture for fear that the following group might overtake them. In one palace, currently used for symphony concerts in the evenings, but traditionally one of the central buildings in the choosing of the Parliament, they have had to build a second door so that the occupying group, if one may call it such, can escape by the back as the following group is marching through the front door.

Why anyone would regard being herded about a town in this way as having anything to do with a holiday is beyond me. Personally I am here staying with a friend, who I am helping as she tries to build an autobiographical account of her rather remarkable life. Yesterday we went as a small group of five to have a meal along a river that runs into the second harbour, called Gruz, on the other side of town. Just getting on the bus among these crowds of tourists, with their baby-carriages and their backpacks, and their intensity, an experience to which one apparently commits oneself voluntarily in the full flowering of one’s mind, gave me as much of a whiff of this kind of tourism as I will ever need. Verily, it was a sort of nightmare, until the mob disembarked from the bus en route, leaving us to find in solitude a very pleasing riverside restaurant free of the pack.

My friend, who has lived here for 40 years, complains that in the old days the city was full of little shops offering services of all kinds –— barbers, tailors, grocers, wine merchants, drapers, and so on. Now, she says, these have all gone, or nearly all gone, and been replaced by shops selling T-shirts made in China.

One is constantly being solicited by beautiful young woman with brochures advertising this or that thing: one I picked up yesterday advertises the locations of three stores within two streets of a firm called T-shirt World, which promises to transfer anything anyonewould want on to a T-shirt, “within one minute.” This has apparently become the quintessential event of mass tourism, allowing the participant to offer a hackneyed T-shirt to nieces and nephews on return home. “We are offering a catalogue with over 500 applications --- funny, new, always actual, with Dubrovnik motifs or desired text and picture,” says the brochure, which, although quite small, is printed in six languages.

I love that expression “always actual”, whatever it means. Of course, only 20 years ago they were pummeling each other to smithereens, these people, in favor of each of their nationalisms, so that “always actual” might contain some sort of hidden message. I hope not.