My Log 253: NDP’s historical importance to Canada justifies their being given a leading role in our government. 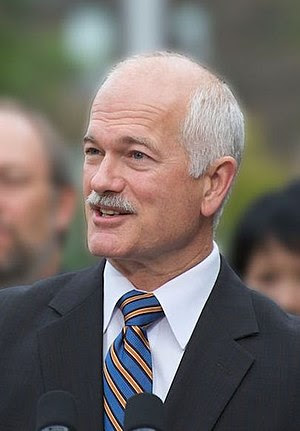 These are heady days for a guy like me, who has voted for left-wing candidates ever since I recorded my first vote in Invercargill, New Zealand in 1946. By the following election in 1949 I was on the losing side, and I remained so until 1964, when Harold Wilson’s Labour party was elected in England, and I cast my vote for it.

I have never been on the winning side in Canada, where, more often than not, in sheer desperation, I voted for Communist candidates several times. Of course, from time to time, I have voted for candidates who actually won seats, but only on three occasions has the party I supported been elected to government.

So this remarkable surge that the pollsters have identified for the NDP comes as a matter of total amazement to a guy like me, who can hardly believe it is real.

Of course, it may turn out not to be real, it could happen that these prospective NDP voters will get cold feet as they enter the voting booth, or that the last-minute scare tactics of the terrified Liberal and Conservative leaders would convince many people to play it safe. In other words, I am as skeptical as the pollsters themselves and all the commentators, but I am hoping that for once my skepticism is misplaced.

What I have to say, however, is that the panic-driven responses of Harper and Ignatieff are full of rubbish. “Amateur-hour” is what Harper called the possibility of an NDP government. And Ignatieff has told people to “get serious”, as if the challenge mounted to their own ridiculous policies by the humane policies offered by Jack Layton and the NDP are somehow merely hallucinatory visions that have somehow lodged in the brains of the leftists.

This is total rubbish. The NDP spokespersons keep repeating that all their projections for spending have been audited by Mike McCracken, a thoroughly excellent economist who does, however, tend to pay more attention to the problems of ordinary people than do most economists.

Furthermore, I don’t need the validation offered by a Mike McCracken to very much prefer the NDP policies. Who in his right mind could vote for Harper with his promised, totally unnecessary billions of projected spending on super-prisons? This is lunacy if ever I saw it. And how about the lamentable quality of his Cabinet, people such as Vic Toews, Jason Kenny, Bev Oda and many others. Complete ciphers, and ignorant to boot.

Similarly, what the hell do we need with fighter planes? Who are these machines to be directed against? Which country is lining up to attack us, in the nightmare scenarios offered by the two major parties?

I heard Ignatieff make a speech yesterday, broadcast by CPAC. I must say, he did not sound so out of touch as all the commentators keep telling us he is. He was talking about the Liberal’s “family pack”, which sounds okay, if you can forget the way his party diminished the social network when they were in power with the millionaire businessman Paul Martin as their Minister of Finance.

In the past the Liberals have introduced some good social legislation, notably that under Lester Pearson, who was very much influenced by Tom Kent, my old former editor at the Winnipeg Free Press. I have reason to believe that Kent was really a British socialist who decided, just as Rene Levesque later did in Quebec, that if he wanted to have any influence in Canadian politics, he had to do it through the Liberal party.

That is the kind of compromise sensible people make from time to time, but it is not one that ever recommends itself to me. I am one of those guys who knows what he believes, and am not about to change my mind to match changing circumstances. I have always, for example, hated banks and insurance companies, and believe they should all be nationalized.

Canada has been well served by the continuing existence of the NDP as a party of the vague left because they have kept alive ideas in our normal political discourse that have always been anathema in the politics to the south of us. In fact, to a very large extent, this is the single factor that has kept Canada distinct from the United States.

If the nation is now about to acknowledge this by giving the NDP a major role in government, than all I can say is, “It’s about time.”

My fingers are crossed until I hear the election results.