My Log 238:Crees open Embassy in Nation of Quebec:, though they have always insisted Quebec is not a nation 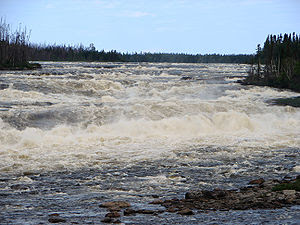 Image via Wikipedia
One of the magnificent rapids on the beautiful Rupert river, before the Crees sold it to Hydro-QAuebec


It is amusing --- in some circumstances one might call it slightly alarming --- to observe how effortlessly the leaders of the Cree Nation, as the eight Cree villages in Quebec now style themselves, have switched their policy towards the nationalist claims of the province of Quebec.

In the 1990s, the Crees published a groundbreaking legal study of Quebec claims to sovereignity, called Sovereign Injustice, in which one of the major arguments advanced against Quebec separatism was that the province of Quebec, whatever else it may be, cannot claim to be a nation without the agreement of the many non-French-speaking people who live in the province. Of these, the indigenous people are probably the most important, for they have an authentic claim to be the owners of much of the territory of Quebec. The study did not deny there may be a French-Canadian nation, but it did deny that this nation is contiguous with the province of Quebec.

I wrote a popular version of this immense legalistic study, called Never Without Consent which also rested largely upon this argument that Quebec in itself is not a nation, and never will be until the separatist agenda of a minority of the French-speaking population has been embraced by the substantial non-French population of the province.

The most extreme expression of this view is the argument tendered by opponents of separatism that if Quebec does separate, the only land it would be free to take out of Canada would be the narrow strip along the St Lawrence, with which they first entered the Canadian confederation --- the rest, including the vast reaches of the north, being lands to which Crees and others have priority claim.

This became an article of faith with the Cree leadership during the years of their maximum opposition to the repeated damming and dyking of their territory by the Quebec government and its agencies.

But magically, it seemed, this article of faith was abandoned when immense amounts of money were dangled before the leadership, embodied in the so-called Paix des Braves. This is a new arrangement with Quebec under which the Crees have agreed to carry out sections of the original James Bay and Northern Quebec Agreement, that Quebec has just never bothered to implement, through, it seems, as much as anything, sheer indifference. In future, Quebec will pay the Crees to fulfil these unfulfilled promises themselves --- a startling new interpretation of the meaning of treaty promises.

Suddenly, Ted Moses and other Cree leaders were proclaiming from the housetops --- or should that be treetops or hilltops?--- that they were making a nation-to-nation deal with Quebec. Since Quebec, in the Cree policies, was not a nation, how could this be?

Simple. Merely by saying so. Overnight, without, so far as I know, any debate among the people, Quebec was recognized as a nation by the Crees.

This recognition has been taken a step further in recent days by the opening of what the Crees call an Embassy to the Nation of Quebec. Although the Crees of Quebec are not a numerically significant element in the Canadian political scene, they have established a leading role for themselves in the minds of non-indigenous people, largely through their once-staunch defence of their great, wild rivers against the overwhelming power of mindless technology. Thus, their establishment of what they call an Embassy in what they now call the Nation of Quebec , will not be particularly welcomed by those forces across Canada which believe that a separate
Quebec, torn from the bosom of Canada, will not be in the best interests of this country, nor of this continent.

Among those who have in the past argued that the Crees should be treated decently by authorities that historically treated them with contempt, this sudden switch of allegiance will be added to an earlier switch, when supporters of a free-running, wild Rupert River equally suddenly found themselves side-swiped as the Crees decided to sell their great river to Hydro-Quebec.