548 June 26 2017: McGill University sprouts statuary with some pretentious explanations as a contribution to the city's 375th anniversary

In recent years it has been my habit to walk almost every day through the McGill University campus in Montreal, on my way to a cafe on the corner of Peel and Sherbrooke street, where a group of amiable Lebanese and Vietnamese lads do their utmost to ensure that the coffee they serve in Cafe Castel is the best in the city.

Summer is the time in Montreal when construction projects break out with a vengeance, and this year, perhaps because the city is celebrating its 375th anniversary, construction has been more noticeable than usual.  Of course there seems to be no particular reason why they are celebrating their 375th, except that Mayor Denis Coderre wants to ride on the coattails of Canada's own 150th anniversary (which also seems to have been dragged out of some cupboard at random!)  to get a bit of publicity for the city. 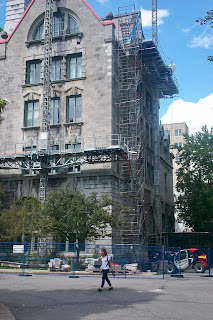 Sherbrooke street these days is ablaze with the colour of flags --- why is it that flags, which I abhor, always seem to be at the centre of any official celebration? --- but all his activity has not left McGill University indifferent, and for months the ornamental entrance gates to the university have been clad in some substance behind which they have been doing restoration work, a large part of their grassy campus surrounded by their academic buildings has been temporarily paved with gravel, and many of the buildings themselves have  also been clad in plastic material and surrounded by the huge machines that nowadays accompany every construction project. Somewhat diminishing the calming academic aspect of the University grounds. 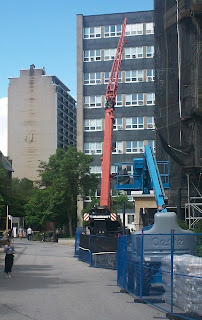 When I realized that the university was breaking out in new sculptures along the Sherbrooke street frontage,  I took my trusty $100 camera in hand to record what seemed to be the University's taste in  modern art. This is a subject I first became interested in when I was 22, and a fellow-boarder in the rooming house I was staying in took it upon himself to urge on me the beauty of Picasso's distorted human faces. Since up to that moment I had given little thought to anything more grave than rugby, cricket, tennis, running and jumping and various other games, and was making my living mainly as a sports writer, this struck me as bizarre. I soon left my home nation and after living briefly in Australia, India, and Europe (if I may be so bold as to regard Old Blighty as part of that continent, an assertion that its inhabitants don't seem too keen to embrace), I ended up at the age of 29 in Winnipeg where, piqued by this subject, I undertook to write a fortnightly column about the activities of the local art gallery. By this time I had visited the major museums in Italy and France, and had even marvelled at the entries in the 1954 Venice Biennale, one of the global leaders in modern art. To be honest, however, my main memory of that vast exhibition is of the remarkable, haunted  paintings of Italian peasants, done by the brilliant Communist writer and artist, Carlo Levi, whose superb account of his prewar exile by Mussolini, Christ Stopped at Eboli had become, and remains, one of my all-time favorite books. Hardly, however, an exemplar of what is usually thought of as modern art.

So you can see that I approach my current critical task with some trepidation, at times having regarded modern art as pretty wonderful for reasons I can hardly explain, and at other times concluding that it is a massive con job almost on a par with the rubbish written by wine experts about their favorite subject.

The first piece that I noticed was a strange one, of eight identical crouching figures, arranged in a circle on the side of a slight mound, which, when I first saw them seemed to be guarded by a huge animal, standing nearby. It made me wonder what it could possibly mean. I thought of the myth of Romulus and Remus, the supposed founders of Rome, who were allegedly suckled by a wolf.
Could that be a clue? When the wolf disappeared after a few days, I had to reject that hypothesis, especially when a few days later still the wolf reappeared at the far end of the street frontage, alone. Nothing to do with the eight figures. 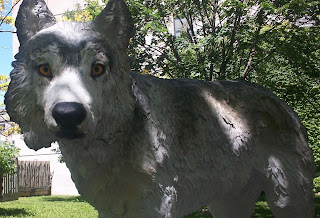 I then noticed that plaques describing the sculptures had been placed around and about, but mysteriously, not connected to any particular statue, leaving us to gather which plaque was meant to refer to which statue --- a task well beyond my intuitive grasp of meaning in modern art, I have to confess. One, however, was almost self-explanatory. It said that Joe Fafard, of Saskatchewan, whom even I know to be one of Canada’s most renowned sculptors, a man who has made life-sized horses, cows and pigs into works of art, was responsible for this dramatic and highly realistic portrait of a wolf, and the inscription gave further insight into his purposes. “The wolf, or mahihkan in Cree, is an animal known for its subservience to hierarchy and its solidarity with its brethren. In fact, when hunting, wolves never feed on their prey until they are able to share it with their pack. This lesson, central to the First Nations cultures, who view the mahihkan as a symbol of empathy towards others, also carries a universal message.” Well, I’ve never heard that before, but I am willing to take their word for it. 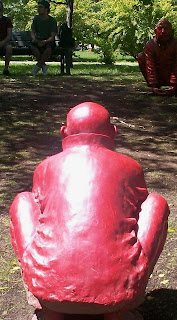 But that didn't really help me with the meaning of the eight crouched men, whose intensity, considering the somewhat passive method by which they were gathered together, was rather troubling.I couldn't find on any of the plaques any information about these crouching figures, but a little diligent internet research threw up that they are the work of a Chinese sculptor called Wang Shugang, who, after spending ten years in the Ruhr region of Germany, returned to China in 2000, where he has become part of the successful movement known as Cynical Realism, a movement that makes fun of the earnestness of the socialist realist art of the Communism world, and of the absurdity of Mao Tse Tung and his works. This piece, called The Meeting, has been exhibited in Germany and in Vancouver, and according to the artist it is painted red because
“… the colour red has multiple cultural meanings in China, historically representing happiness but during the Cultural Revolution it symbolized terror. Today red is the colour of the faded lettering praising Mao on the ceilings of the factories, coats of the Buddhist monks and the colour of wedding decorations”. 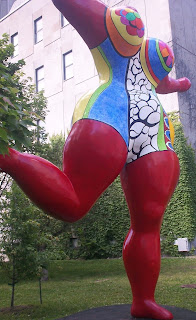 Not far from the Joe Fafard wolf is a huge, sculpture of a woman dancing, which the plaque tells us is by Niki de Sainte Phalle, and is the largest in her well-known series called Nanas. These  “ enormous, curvaceous Nanas celebrated the fecund female form, featuring large breasts and buttocks, splayed limbs, joyous dance postures, and often, black skin,” according to an internet note on her remarkable career as the ultimate in rebellious, feminist artists.  The McGill University plaque says her huge, multicolored figure is “an echo of Matisse” and is a “dazzling voluptuous Venus, bearing the name of the artist’s granddaughter Bloum…the piece celebrates the strength and joy of the liberated woman and emanates hope for a different world.”  I guess it is all in the eye of the beholder. Personally I didn’t think much of it, but when I read about other of her works during a tempestuous life, I found myself  in sympathy with her, and marvelling, as so many onlookers had done, at her biggest Nana, 82 feet long and 30 feet wide, which could be entered through a door-sized vaginal opening between the legs, and contained inside such items as a milk bar inside a breast, and a brain with mechanical working parts.  Funny I had never heard of this woman before, but it is not so surprising that I did not find her Nana on site particularly inspiring, since she was the type to have built a huge tarot garden, and there are few  superstitions I hold in greater contempt than astrology.


Another Chinese artist represented is Ju Ming, with a large stonework sculpture that looks more like a Henry Moore than what it purports to represent which is  “tai-chi.”  This is the slow-moving exercise routine that people practise in China, even elderly people, and the plaque says of this sculpture that Ju Ming finds inspiration in Cubism and constructivism as well as in the practice of Eastern spirituality, “in this case taichi.” 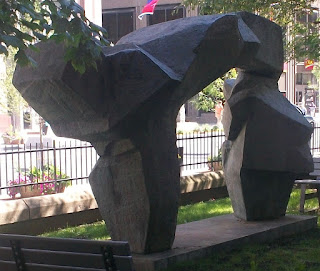 “This discipline of the mind and body….frees the energy and increases concentration and relaxation, develops internal fortitude, flexible and flowing rather than physical brute force, which is static. It describes this statue as “the perfect example of balance and harmony, a symbol of the body and spirit attaining fulfilment.” Once again, I’ll take his word for it. It reminds me more of the brutalism architecture (that they are in process of trying to humanize now) that inspired the National Theatre in Ottawa in the 1960s, than it does anything to do with harmony and balance, but it is an effective construct that I am far from scoffing at. This artist’s work is already on display in three locations in Montreal --- at Beaver Lake, Square Victoria and Place d’Armes.
Finally, a Quebec woman artist by the name of Catherine Sylvaine is represented by a curious huge metal funnel, beneath which, so the plaque 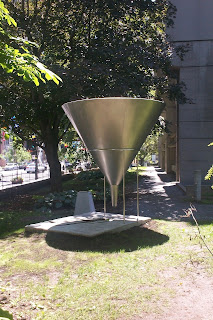 so the plaque says, “she invites passers-by to lie down, in the imprint made by the artist’s body on the cement base. The funnel becomes the unusual intercessor between the willing participant and the world.” Thus, she “explores notions of identity and the difference between being and perceiving: lying down on concrete also opens the way to reflecting on the issue of homelessness.” Once again, I will have to take her word for that: the imprint beneath the funnel on the day I saw it was full of water, so one impact of the experience would be that the participant would have  received a wet arse, and, dripping, had to hurry off home to change into something dry 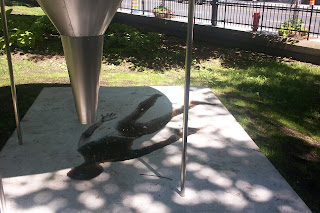 Last of all, I took a picture of a little statue I have grown to like during my wanders through this campus: it is of James McGill, the Scottish merchant founder of the university, sculpted by David Roper-Curzon in 1996 at the instance of the McGill Associates. McGill died in 1813, but he left in his will, "a parcel of land, to the Royal Institution for the Advancement of Learning… to erect and establish a University for the purposes of education and advancement of learning in this province." In 1821 this bequest was activated to begin creation of the important university that exists today in the heart of Montreal, and the sculptor has pictured a man who, I suspect, cannot have been anything 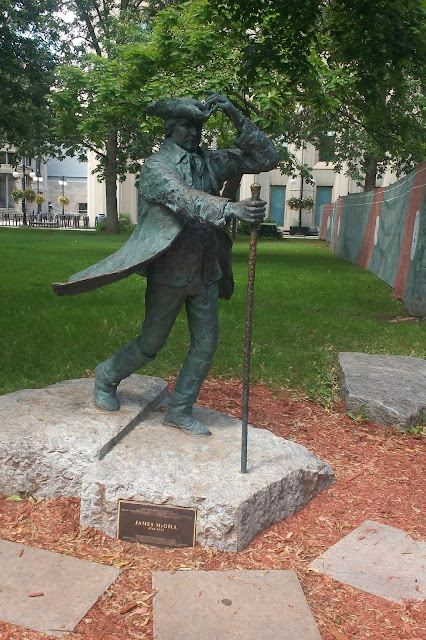 like the real McGill, in this sculptor’s reading a light, small man, his tail-coat blown behind him by a strong wind, hanging on to his hat with one hand, his cane in the other, as he strides into the wilderness in search of furs and wealth. A charming image, especially for one of those old-time robber barons, and perhaps more than he deserved --- except for his foresight in establishing this university.
I have discovered that these sculptures are just part of the 30 that the Montreal Museum of Modern Art has scattered along a kilometre of Sherbrooke street as a contribution to the 375th anniversary of the founding of Montreal.