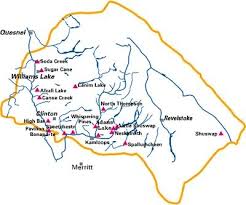 I see today that the grievances of the Secwepemc people of British Columbia, known to non-natives as the Shushwap, have been brought to the notice of an international audience by means of an article published in The Guardian newspaper and online web site Guardian Unlimited.
The article is written by someone with the unlikely sounding name of Julian Brave Noise Cat. But though his name may sound bizarre, the burden of his article is deadly serious, and reveals details of the behaviour of Canadian governments that should be, but I fear is not, known to every Canadian.
The article says that “there are 64 First Nations in the midst of a treaty process aimed at extinguishing all present and future Native claims to land. I’m a member of the Tsq’escenemc, or People of Broken Rock, one of 17 bands of the 10,000-strong Secwepemc Nation, and one of four Northern Secwepemc bands currently negotiating our own treaty with the federal government.”
The negotiation the writer speaks of covers a relatively small area of land, 170,000 acres that is part of the vast Secwepemc territory of 180,000 square kilos in the interior of British Columbia, almost a fifth of the province, against which no treaties have ever been recorded.
Julian Brave Noise Cat says they have been offered $37.5 million US in exchange for an end to all claims covering nearly 14 million acres of their traditional territories. “To put this into perspective,’ he writes, “ the treaty returns just a hair over 1% of our land and pays $2.74 per acres for the rest. This is a deal sadly reminiscent of the 47 cents an acre offered to California Indians in 1963.”
But it is being offered at a time when British Columbia farmland costs $448,510 an acre, down to about $777 an acre for bare land in the north of the province. “There is no corner of British Columbia where land sells for $2.74 an acre,” he writes.
These are not new facts, of course. A few years ago I followed with intense interest the effort of a band in this area to oppose the expansion of a Japanese-owned tourist and ski resort called Sun Peaks.  Members of this band repeatedly put themselves on the line, were repeatedly arrested, their hastily-built shacks by which they tried to impose their presence destroyed by police, and were jailed and prosecuted for trespassing on their own land. So far, British Columbia government has stuck to its position that the land is Crown land which they are free to lease to whomsoever they may wish, a rather strange situation in which a Canadian government becomes the spokesperson and supporter of a Japanese company in an argument with indigenous Canadians who have lived in the area for 10,000 years.
A vote by the four Sepwepemc bands involved in the negotiation described in the Guardian is to be held in October. But the writer of the article has retained a kicker with which he ends his melancholy story: and that is that in the very process of negotiating this “deal” his people have undertaken  debts estimated at $16.9 million that will come out of their final settlement.
This is justice?
Well, it is the way Canadian governments have been picking off indigenous people across the country, paying them sums of money in return for control of miniscule parcels of land, against which they have to extinguish all the rights that are promised to them in the Canadian Constitution, negotiated in 1982.
It is not that these people are poorly educated in matters relating to their land, or unaware of the wider world.  In fact, they have been fighting against the European/Canadian invasion of their lands since the first settlers arrived among them. I went to a brilliant Web site (http://www.firstnations.de/development/secwepemc.htm), entitled First Nations and Environmentalism in British Columbia, in which it is recalled that in 1906 one of their chiefs “made the arduous journey” to London to assert their land rights before King Edward; how in 1914 another chief Louis (in their own language XlExlexkEn) testified before the McKenna McBride Commission of inquiry in Ottawa, and yet another in 1916 jojned a delegation to Ottawa to protest against the punitive policies of the government. But that wasn’t all: the protests continued and gave rise to one of the most significant indigenous leaders of modern times, George Manuel, Chief of the Neskonlith band, who became president of the Union of BC Chiefs, President of the Indian Brotherhood and founder of the World Council of Indigenous Peoples.  I remember hearing George Manuel tell a group of native people from the Northwest Territories that they were a majority in their part of the country, and they should act like one, something that represented for them a new opening into a more promising future.
All I can suggest to any readers whose interest might have been caught by this article is that they go to that essential lesson In Canadian history represented in the aforementioned web site. I am sure they will find a lot of stuff that is new to most of them.
I leave you with some quotes I have copied from that web site which suggest a history of Canada that seems to be more or less unknown to your average Canadian:
From Art Manuel’s document, Sun Peaks --- Indian land for sale: "We are poor not because our land is poor but because we have been dispossessed of our land and because Canada and the provinces have assumed 100% power over making laws over our land ... All revenue generated in Canada is earned from using our natural wealth and resources. We have never benefitted from this. All we have been given is the crumbs from the table of the federal and provincial governments."

Chief  Francoise Selphagen of the Little Shushwap band in 1912: "Our tribal territories which we have held from time immemorial, often at cost of blood, are ours no longer ... We are all beggars, and landless in our own country ... What promises made to us when the first whites came to this country have been broken. Many of us were driven off our places where we had lived and camped because these spots were desirable for agriculture, and the Government wanted them for white settlers. This was done without agreement with us, and we received no compensation."
Chief Selpaghen called for the government of Canada "to do what is right" and "to stand up for us" when he testified in 1914 to the McKenna McBride Commission: "We all want to work our land to good advantage, and we are short as to our means and knowledge of working the land."

From the web site: “For over a century the Bonaparte people saw their lands invaded and plundered by a raft of miners, ranchers, loggers and settlers. None of the huge profits were shared with the communities of the Band which became increasingly impoverished as the people were progressively disinherited of their land and natural resources. The reserve system imposed on First Nations did not improve living conditions. Homes on the Bonaparte reserve had no heating, electricity, running water, plumbing or insulation until the late 1950s. When the 86-year-old elder Jimmy Morgan lost his house to fire in 1973 it triggered a blockade during which armed indigenous activists stopped commercial traffic on Highway 92 through the Bonaparte reserve for six weeks and demanded a $5 toll from all vehicle drivers as a compensation for the appalling housing conditions on the reserve.”

Just a little lesson in Canadian history, today exposed to international readers, through The Guardian of London.
Posted by boyce richardson at 9:49:00 AM