My Log 307: Back at the keyboard after a month’s hiatus: a keyboard I short-circuited by spilling wine on it 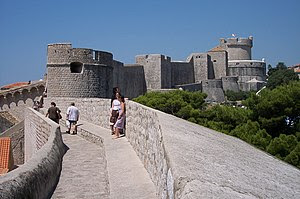 English: Walls of Dubrovnik (Croatia). Français : Les murailles de Dubrovnik, en Croatie. (Photo credit: Wikipedia)Since I last wrote in this space on May 19, more than a month ago, my life has been through a series of upheavals that perhaps I should describe in order.

First, I abandoned my residence in Ottawa after 35 years, assigned my apartment (into which I moved only last November) to a new tenant, and put all my furniture and worldly goods into storage for two months.

Second, I rented an apartment in Montreal as from July 1.

Third, I visited two of my sons in Montreal and Toronto and managed to observe that they are well embarked on their careers as screen writer and criminal lawyer respectively. While in Toronto I had a visit with a literary agent who has undertaken to represent a book I have collaborated in writing. The agent in question will be known to many people in Ottawa, for it was Jonathan Williams, a Welshman who returned to Europe some 26 years ago and settled down as the first literary agent ever in Dublin, Ireland,where he has been successfully plying his trade ever since. (We played cricket together at Rideau Hall, sharing many momentous tussles with bat and ball.)

The book he has undertaken to represent concerns the creation half a century ago of a remarkable coffee house, The Troubadour, in London, by a young Canadian couple, Michael and Sheila Van Bloemen. As a correspondent of a Canadian newspaper at that time I used to hang out in that place because it was so sympathetic to my dissentient spirit.)

Fourth, I took off on June 12, 13 days ago, for Dubrovnik, Croatia, where I am spending most of the summer while polishing my manuscript, preparing it for submission to publishers.

Fifth, I intend to return to Montreal, where I lived until 1975, early in September, always provided I survive that long.

Since my arrival here I have taken a walk every morning up 205 stone steps, and down again into the old town, whose history as a significantr settlement dates at least as far back as the sixth century AD. Dubrovnik is still a beautiful small town, with, as far as I can gather, some 50,000 people in the region, which surrounds a central city whose thick, stone walls were built many centuries ago. The small city by the eighteenth century was established as an independent republic that maintained more than 180 consulates and vice-consulates around the world.

In more recent years, notably with the Yugoslav war of the 1990s, the history of this whole area has become less of a model for the outside world. Dubrovnik, although defenceless, was brutally attacked by the ` Yugoslav army (staffed almost entirely by Serbs and Montenegrins) and Croatia, the small state in which Dubrovnik exists, was itself along with all other ethnicities involved in the war, convicted of carrying out a number of appalling atrocities.

Before the war, some 8,000 people were said to live inside the walls of Dubrovnik; now the fiture is variously given as between 500 and 700 --- in other words, a victim of the appalling military technique known as ethnic cleansing.

The damage created by the bombing assault was repaired after the war ended (by the French, I have been told) and the city today is restored to something like its former glory. However, many people who have known it for several decades regret that what was a vigorous, functioning city before the war, is today more like a shell, whose only purpose seems to be to welcome passing tourists who are disgorged from the countless cruise ships that call for a stay of a few hours, long enough to permit people to come ashore and be ushered around the town, in and out of the various cathedrals and prominent old buildings, on a strict schedule.

As one person put it to me, “We used to have all the services needed by people but most of those have closed and been replaced by shops selling T-shirts made in China.”

Anyway, here I am working over my manuscript, walking every day in the intense heat (which I like very much) and taking in a surprising number of concerts and performances by visiting artists. One that has particularly entranced me this week was an exhibition of butoh dancing by a team of three Japanese artists. This opened with one of the most riveting performances I have ever seen in a theatre, of a naked young woman, bathed in an eerie white light, slowly, slowly, making her way down a set of stairs in such a fashion that most of the time she was lying on her back, working painfully from one step to a lower one, until she reached the bottom, where she picked up a blouse and pair of trousers and out them on as if the whole performance was just something out of ordinary life. An amazing spectacle that left images with me I am unlikely ever to forget.

Okay, I am back, my return signaled at the weekend by an amazing 60-0 Rugby victory by my team, the New Zealand All Blacks, over the Irish national team. What a way to return to action at the keyboard!