My Log 276:Documentary on “Experimental Eskimos” throws a sorry light on the arrogance, ignorance of Canada’s northern administration -- 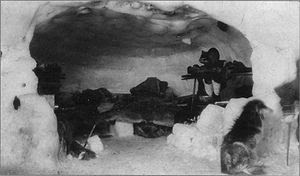 Image via WikipediaI hardly know where to begin to write about the documentary film screened tonight by CBC --- The Experimental Eskimos. It dealt with the experience of three notable Inuit --- Petger Ittinuar, Zebedee Nungak, and Eric Tagoona, --- who were especially chosen by educational experts in the north, because of their exceptional abilities, to be sent south for higher education. That the experiment had both positive and negative effects was shown by the film, directed by Barry Greenwald. But what has to be written first, I think, is that the positive results, such as they were, were political and formal; and the negative results were entirely, devastatingly, personal.

Allow me first to go back into history just for a moment. The great panjandrum of Canadian anthropology in the 1940s and before, was a man called Diamond Jenness, a man born in New Zealand (like quite a few others who have become prominent in the affairs of aboriginal Canadians).

He wrote a five-volume study of the Eskimos, as they were then known, and in 1968 published his conclusions in a slim chapbook. Whatever his immense accomplishments in his earlier life, the conclusions he published in this book must remain as a blot on his career. He advocated that there was only one solution to the problems of Canada’s Inuit, which was to move them south, where they would be able to get jobs. That was published when Jenness was at the end of his career.

At about the same time, the Northern Science Research Group, headed by the remarkable AJ.Kerr (affectionately known as Moose throughout the north) published a study of Eskimo Relocation for Industrial Employment, by D.S. Stevenson. This was also a slim chapbook, but it contained one paragraph that has refused to leave me over the years since.

“Frustrated, confused and downtrodden peoples everywhere have had recourse to alcohol, drugs or religion,” wrote Stevenson. “For the Eskimos in the south, the placedo is alcohol…It seems sometimes as if those least assimilated people deliberately use alcohol to blot out reality. I have been at drinking bouts where one woman, holding a naked baby in her lap, sat alternately sipping cheap rye whisky and vomiting into a cardboard box at her feet: she and some others were coimpletely drunk, yet they kept on drinking until absolutely unconscious.”

That, in face of such evidence, a famous anthropologist could have recommended that all Eskimos should be moved south simply to get jobs, could surely stand as a template for the Euro-Canadian insensitivity to the problems confronting them as they moved – uncomprehending, for the most part, ignorant to a very large degree and, it has to be said, prejudiced on racial grounds --- into the north to establish administration.

I mention this because the tale of the three men who were subject of the documentary broadcast tonight is that their personal lives were ruined by the experiment. None of them, or their families, was consulted or asked permission to send these three boys to Ottawa for European advanced schooling. That is typical of the insensitivity and arrogance of much that has passed in Canadian history for governmental administration of our northern regions.

One conclusion that the film comes to after examining the experience of the three men is that possibly --- just possibly, mind you --- the best option would have been for Euro-Canadians to have left the Inuit alone, not to have interfered with them, allowed them to continue their traditional way of life and to make their own accommodations with Euro-Canada as and when these became necessary.

I knew Zebedee Nungak fairly well during the fight over the James Bay hydro project in Quebec in the early seventies. He was an amusing, effective spokesperson for his people, but his humour and goodwill evidently were overlayers to hide the dreadful experience it had been for him to have been chosen by Euro educators for special treatment as an experiment. Zebedee helped to negotiate the James Bay agreement, and was one of its signatories. His evidence in the film was that he suffered from that, because in Povingnituk, where he came from, a large segment of the population opposed the James Bay agreement and held his approval of it against him.

Similarly Petger Ittinuar negotiated a rocky path in the white man’s world. He was the first Inuit elected to Canada’s Parliament, for the NDP. He played an important role in the interface between his people and the government, but later suffered because of criticism of his stand taken in support of this white man’s project. He switched parties, another no-no in the white world for which he was severely criticized. When he left Parliament he took refuge in alcohol, as indeed did all three of the experimcntal Eskimos, at various times in their lives. Eric Tagoona, from Baker Lake, played a role in obtaining the inclusion of aboriginal rights in the Canadian constitution. But he perhaps suffered more than any of them by entering a downpath of alcohol, drugs and abuse that has led him to spend the rest of his life as a recluse in Baker Lake.

One statement rang out from the film for me: when Zebedee Nungak was denied by the white politicians, he said, he would never stop urging his fight for Inuit rights, and his son, standing behind him, and his son’s son later would continue to fight their sons and the sons of their sons.

This is a documentary that it must have been salutary for Euro-Canadians to see, for it exposes, not only the fact that the road to hell is paved with good intentions, but the lack of wisdom and empathy that has characterized so much of Canada’s interaction with aboriginal people.