My Log 230: A statement I totally agree with: the Canadian government has an aggressive policy to assimilate Indians 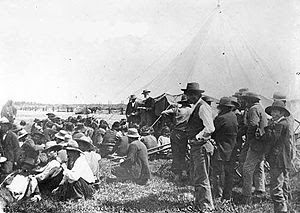 Here is a statement about relations between the Canadian governments and the indigenous people, with which I wholeheartedly agree. It comes from a group called Defenders of the Land, who encourage and organize First Nations to base their policies on Aboriginal rights (which are recognized in the Constitution) and title.

This year, the Canadian government has renewed an aggressive policy of assimilation of Indians. Despite all the apologies and high-minded words from elected officials over the last few years, this policy is the same Indian policy the government has pursued since the 1850s. From Tom Flanagan and the Fraser Institute, there is a push for privatization of reserve lands and conversion of Aboriginal title into fee simple on a small percentage of traditional territories. The comprehensive claims process and the regional treaty tables continue to push First Nations towards extinguishment of title using a range of carrot and stick tactics. Indigenous Peoples who fight back too hard against the assimilation agenda, like the Algonquins of Barriere Lake, are targeted for special repression.

It is important that the threats to the rights of the indigenous so clearly described in this one paragraph should be absorbed and thoroughly understood by Canadians.

As the Defenders say, assimilation policies have been pursued since at least the 1850s, a fact that makes nonsense of most non-indigenous commentators in the mainstream media who, when they rediscovered Aboriginal people in the last few years, almost unanimously came to the conclusion that as a nation we had a miraculous new policy available: namely, assimilation.

These people seemed not to know that this policy had ever been tried before, whereas the fact is, assimilation forced on indigenous people through countless Acts of Parliament, thousands of Orders-in-Council, and untold ad hoc regulations, was precisely what had brought the native people to their state of endemic poverty.

These so-called right-wing “experts” appeared never to have heard of the 1850 Acts, ostensibly designed for the protection of Indian lands, which nevertheless allowed the Crown to lease Indian lands, collect rents, license logging, and put the money into a fund that was spent, but over which, in spite of their protest, the Indians had no say whatever. This policy survived so long that when David Crombie became minister in 1984, he asked his bureaucrats “if it was still existing practice to use Indian funds to pay the cost of programmes which are regularly available to the Canadian public?” Of course, this question was never answered, like the 63 others Crombie put to his civil servants before being summarily removed from office.

These “experts” appear to have never heard of the 1857 “Act for the Gradual Civilization of the Indian Tribes of the Canadas,” which spelled out in detail how Aboriginal people could be detached from their community, their nation and even their race, and become honorary whites. Have they never heard of the Establishment Acts of 1859 and 1869, which replaced traditional chiefs with elected chiefs, encouraged Indians to take private ownership in their lands (two policies actively being pursued by these modern-day Rip Van Winkles), and which led to the absurdity of tens of thousands of Aboriginal people being defined as non-Indian although they lived as Indians, spoke Indian languages, and held to Indian beliefs and values, while thousands of European women who married Indians were defined as status Indians? To protests made against these policies (which continued until 1985) one bureaucrat responded that these measures were “designed to lead the Indian people by degrees to mingle with the white race in the ordinary avocations of life.”

Finally, did they never read the Indian Act, passed in 1876 with 100 sections, most of them at the discretion of the Minister, the purpose being to exercise full control over every aspect of Indian life in Canada? Within 30 years, the Act had 195 sections, formalizing the inferior status of Indians, so that an Indian could scarcely sneeze without authority of the Minister.

I have emphasized the controls exercised through legislation because they represent a measured, considered response by Euro-Canadians to the indigenous people they found here when the European invasions occurred. Nothing slapdash about them, nothing spontaneous, simply a measured expression of the racism and arrogance of the government society towards their indigenous neighbours.

The above summary of an acceptable native policy, depending on an affirmation of Aboriginal rights and title, was issued in the context of arrangements for Native Sovereignty Week, an observance launched successfully last year, and to be repeated this year in the week of November 21-27.

…..Indigenous Peoples across Canada are not backing down in their demand for respect for Aboriginal title and rights. Increasingly, bands are dissatisfied with the comprehensive claims process, which results in permanent extinguishment of title in exchange for a small amount of cash and a fraction of the land rights. Communities from coast to coast are continuing to assert their rights to self-determination, and choosing to chart their own destiny, insisting on consent for resource extraction and industrial activity on their lands, and insisting on their right to choose how they will govern themselves. The national chief of the Assembly of First Nations is calling for the elimination of the Indian Act and the refounding of the relationship between First Nations and Canada on a basis of Aboriginal and treaty rights.

Defenders of the Land is calling on communities across Canada to explore the themes of resistance and revival in the face of the government's assimilation agenda. We are suggesting education and exploration of the following themes:

· Understanding and exposing the government's fundamental strategy of assimilation and extinguishment, and the ways in which this is implemented: through the comprehensive claims process, through the Indian Act, and through Indian Affairs. How does Indian Affairs work to pressure, shape, and control the choices of individual Indians and First Nations? What are some practical case studies of Indian Affairs' actions? How do we expose the very colonial character of Indian Affairs to a broader public?

· Exploring alternatives to the present colonial infrastructure. Shawn Atleo has called for abolition of the Indian Act, but right wingers will also seize on this to replace the Indian Act with fee simple and assimilation policies. What is a viable, concrete alternative that respects Aboriginal and Treaty rights? These questions could be explored through the presentation of a range of concrete alternatives and concrete strategies for achieving them.

· Exposing the Canadian Boreal Forest Agreement signed this past year - a deal between ENGOs and industry without involvement of First Nations on the excuse that there are "too many of them to consult". The deal has serious implications for Indigenous Title and Rights but does not even mention the UN Declaration on the Rights of Indigenous Peoples, and its language on Indigenous rights is very weak.

· Understanding the importance of language and cultural renewal, and traditional governance, to Indigenous resistance and self-determination.

What does it mean for supporters to act in solidarity? What are the dangers of people getting engaged to get something out of it for themselves? How do we recognize and talk openly about the challenges of building relationships of solidarity? What do people need to know to enter into constructive relationships of solidarity, and not impose a further burden, or their own ideological agenda, on First Nations?

The Defenders' statement says that some of these themes might be explored in private, Native-only or mixed workshops leading up to the week of educationals. The question of solidarity and relationship building with non-Natives could be tackled through one or two-day symposia involving Native and non-Native organizers.

It adds that: “Defenders of the Land is a network of First Nations in land struggle working with urbanized Indigenous people and non-Native supporters in defense of Indigenous lands and rights.”