My Log 495 January 5 2016: Journey through Dalmatia --- 2: Zagreb. Through a bleak landscape of karst topography to emerge in a civilized, beautiful old city, capital of a hopeful new state with ancient roots 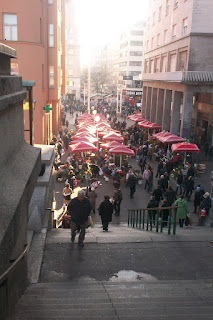 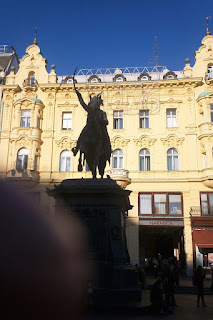 Above, left:  Overview of a small market  in Zagreb, leading up to what they call the Old Town.

Above, right: Only a few steps away, Croatian warrior hero  Ban Josip Jelacic (1801-1859) sits on his horse. The statue was erected in 1849, but was removed by Tito in 1947, and restored to its dominant place in 1990. Today Jelacic is regarded as a rebel in Austria, a traitor in Hungary, but a hero in Croatia.

On Dec 21, four days before Christmas, I left Dubrovnik, where I am currently staying  for three         months, to travel by bus on a trip through an area that can be roughly called Dalmatia. My objective was to avoid being the grumpy old, Christmas-hating man sitting in the corner of a happy celebration with lots of yelling small children. Let them have it, I would be elsewhere.
I decided to go alone but my partner Sheila, a woman who moved to Tito’s Yugoslavia in the 1970s because, among other reasons, she wanted the schools to teach her children Marxism, rather than Christianity, decided to come along. And so we set off on an eight-hour trip of roughly 600 kilometres to Zagreb, the national capital, that we expected to take eight hours.

We also expected the bus to be crowded at that time of year, but in fact there were only eight or ten passengers, so we had plenty of room to stretch ourselves, which made the journey that much more comfortable. We had to travel north along the narrow strip of land by which Croatia manages to hug the coast, which gives that small country the majority of seaward-facing areas that have been bones of contention between various great powers for century after century. Probably 100 miles or so along the way we began to travel through what is known as karst country, a sort of landscape that covers much of Croatia, on which only low-lying bushes have managed to secure the means of life, its bleakness making one wonder how any humans have ever been able to scrape a living from their lands. The wonder of it was that the motorway on which we travelled through this bleak landscape was of super-modern construction, with dozens of well-constructed tunnels ---  a road that could only have been built at a cost of hundreds of millions of dollars, and yet one that seemed, for mile after mile, to be serving no discernible population.
Anyway, eventually, we came to the national capital, a city of which I once read that one of the old-time travellers from the Middle East remarked that upon hitting Zagreb, one was at last aware of being in Europe. 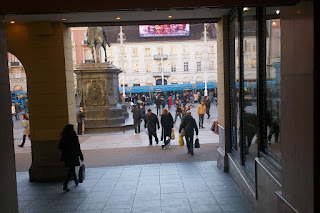 Sheila, of course, had a friend in Zagreb whom she had known in the old days. When Vicko Krampus had arrived in London in the 1970s he was a wide-eyed student from Yugoslavia, agog at the freedoms and carefree attitudes he found in London. And when we met him, now a professor at a Zagreb university, he was anxious to show us the glories of the city he loves. He took us through the seven central squares  --- generically known locally from their shape as the Green Horseshoe --- around which are based the centres of political power. He took us into a hotel, the Esplanade, which was as ornate and beautiful as any hotel I have ever seen, and which had been built especially to serve the old Orient Express, the train  across Western Europe to Istanbul that was patronized by the gentry in the old days. Evidently, to judge by the atmosphere inside the hotel, much the same rules apply today, for as we entered we were confronted by a formally-dressed personage sitting at a seat ready to interrogate everyone who passed his way. Because our guide was known to him, we were allowed to wander through its great public rooms but I felt sure we would never have passed the reception area without our guide. The high rooms were dominated by enormous mirrors that enhanced the feeling of ornate magnificence, but for all this, there were some fairly cozy areas where people were sitting taking their coffee. And outside we stepped on to an enormous terrace --- this right in the middle of a busy city: how had it ever preserved so much space in so crowded an environment? --- on which one could image in the summer, crowds of customers listening to orchestras and relaxing with friends.
Later, he took us also into a museum where rests the oldest example of writing ever discovered in Croatia, from pre-Christian times, the details of whose message, unfortunately, I have forgotten. Later we wandered alone through a colourful market, with its multi-coloured fruits and vegetables, kitchen implements and clothing. It was, in fact, not unlike the Jean Talon market in Montreal, equally large and colourful. 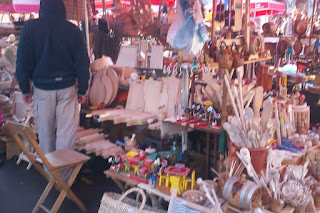 But what Montreal lacks is this effortless timelessness, for only steps away from the market is the central square with a dramatic statue of Josip Jelacic (1801-1859), on a horse, a statesman, diplomat and soldier who defended Croatia and the Croatian language, while trying to maintain his independence in the peculiar circumstances of the nineteenth century with its Austro-Hungarian empire falling into decline, and coming to an end in the First World War. Originally Jelacic's sword pointed to Hungary, in recognition of his having fought Hungarian authority, but when it was restored the statue was turned around, so that now the sword points southwards (to nothing in particular).  I have never been more aware than I was on this trip of the presence of the ancient past, echoes of which seemed to pop up wherever we went, although I am prepared to entertain the idea that this is all in my head, because the recent Yugoslav wars were fought according to the tensions, hatreds, and loyalties handed down from history to their present-day combatants.


In fact, when I first wrote this piece I had been told the statue was of another earlier Croatian hero, namely Nicola Subic Zrinski,  a warrior who also fought what might be called the occupying powers, but three centuries earlier. In 1566 his 2,300 soldiers battled the Ottoman force of 102,000 under Suleiman the Magnificent. Zrinski died nobly on the battlefield a few days after the Sultan himself died of a cerebral haemorrhage. (This Sultan is the one I have referred to in an earlier post, number 493, of Dec 15, mentioned by Dr. Amanda Foreman in her magnificent BBC series on the ascent of women. He entered this story because, although Sultans were forbidden to marry, he nevertheless married a girl called Roxelan from his harem, who turned out to be one of the great feminists of all history, transforming the situation of women in the lands under Suleimen’s rule.)

A curiosity in Zagreb is the funicular railway, which takes one only on a four minute ride that could as easily be walked in 10 minutes. But people seem to use it, tribute, I guess, to the innate laziness of most people. Up there after the ride one comes upon another aspect of the city, lots of handsome old buildings, quite a few streets, the odd church, and so on. We walked down, back into the central city and that night Visko took us to an excellent restaurant just above the market, a place that is used by agencies to dine their visiting tourists, but one that looked like it had always existed, and where the standards were kept as high as possible. We tried two restaurants in Zagreb, the other called Vinodolo, and both were excellent.

These two buildings, of medium height and elegantly designed, seem to be typical of  many European cities  in the modern world. These two are in the upper reaches of Old Town Zagreb, but I saw others elsewhere, especially in Trieste, Italy, whose downtown is full of such rows of buildings. 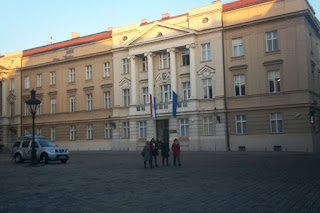 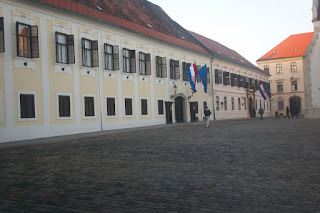