My Log 246: I’ve been reading a raft of thrillers, mysteries and so on, and I report on what I can remember of them 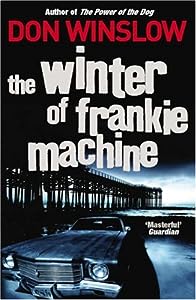 Cover of The Winter of Frankie Machine In recent months I have read a large number of novels of what might be called the popular variety --- that is, most of them have been about crime or associated topics, thrillers, mysteries or the like. These books, so far as I am concerned, share the one characteristic that having read them, I immediately forget them, and when asked the day after I have finished reading one what was the subject, I am completely incapable of remembering anything, unless and until some trigger in the form of a theme or a character is supplied, when with luck it will all come flooding back.

Naturally, I often ask myself why I read these books: I suppose the answer is that it is because they are easy reading, do not require intense concentration to understand what they are about, and are pleasant to read.

(You might well interpret the foregoing as a comment on the ageing process: thirty or forty years ago I had no difficulty recalling the themes of books I had read, even months afterwards.)

A point that is worth making is that the writing of these sorts of books is often brilliant, the plotting precise and exciting, the hold on your imagination as you’re reading them is intense. In this category I have to name especially John Le Carré, the British author, Harlan Coben, Don Winslow, and Elmore Leonard, American writers of thrillers, and James Lee Burke, whose specialty is Louisiana and New Orleans, and who has written an excellent book on the aftermath of the Katrina hurricane in that great city.

I will deal with these books in order of the vivacity in which I can recall them:

The Winter of Frankie Machine, by Don Winslow: I finished this only today. It is a really excellent study of a man Frank Machianno who in his late middle age is running a popular bait shop near San Diego, cares very much for his daughter, his estranged wife and his mistress, and, as the book slowly develops from this idyllic opening, is a man who has retired from a legendary career as a Mafia hit man, to which he is being drawn back by the decisions of his Mafia bosses. He is old-style Mafia who believes in the loyalty oath and in doing what he is told by his bosses. But in these events he is cruelly betrayed by all those he has trusted. In his prime he was known as Frankie Machine, a name bestowed on him because he was always so phenomenally successful in the enterprises he undertook. The book suggests a close understanding between even the honest cops in the area and such old-style crooks as Frankie Machine, and the theme of the book is devoted to Frankie’s attempt to discover which of his bosses and associates should have decided to hit him when they summoned him to a meeting. And, of course, why. Eventually, inevitably, he faces the fact there is no escape from the fate they have chosen for him, but before he goes he delivers a remarkable message that resonates with me. I can tell you why, too. I often think of a book I read a few years ago called Gangster Capitalism, in which the author put forward the idea that all this stuff about organized crime had been invented by big business as a means of hiding the fact that the crimes of corporations are hugely bigger than anything done by the Mafia, a thesis that has been roundly endorsed by recent events, in which the global economy was brought to its knees by massive corporate frauds. Here is what Frankie Machine says: “Nilke pays twntynine cents to a child for making a basketball jersey, and then turns around and sells it for one hundfred and forty dollars. And I’m the criminal? …. You could take all the Crios, the Bloods, the Jamaican posses, the Mafia, the Russian mob and the Mexxican cartels and all of them put together couldn’t rake in as much green in a good year as Congress does in a bad afternoon. And you could take every gangbanger selling crack on every corner in America and they couldn’t generate as much ill-gotten cash as one senator rounding the back nine with a corporate CEO. My father told me that you can’t beat the House. And he was right. You can’t beat the White House or the House of Representatives, They own the game, and the game is fixed, and it isn’t fixed for us.”

I’m afraid that is only too true.

La Brava, by Elmore Leonard: Leonard’s mastery over his curious, stripped, bald prose seems to grow with each book. I have read a lot of them, now, and he has the gift of plotting, and keeping the plot alive until the last pages. La Brava is a sort of former cop who has remarkable commonsense and is also romantic enough to idolize a movie star of former days who he had found come to rest in a local hotel, under the care of a rich old man, Maurice. She is also vulnerable to the charms of a crooked waster called Richard Nobles with whom she dreams up a scheme to defraud Maurice. La Brava, in spite of his admiration for the woman, isn’t prepared to let her get away with it, and the plot deals with the working out of this story, which takes place in Florida. An excellent study of an unusual hero, La Brava, and of the usual street heroes and villains of a Leonard book.

A Most Wanted Man by John Le Carré

Our Kind of Traitor, by Le Carré: These two books, written in 2008 and 2010, prove that Le Carré has made the transition from the Cold War, the subject of his earlier novels about spies, to the world of terrorism with scarcely a false step. A most Wanted Man deals with a strange guy who turns up from the former Soviet Union, takes up residence with a pair of Turks living in Hamburg. He is immediately suspected by the German security services of being a prospective terrorist. He has some claim to money that had been deposited years before, after some dirty tricks to earn it, with the father of a British bank. The son now running the bank decides to give it to him, and the plot, always rather obscure in Le Carré, rolls on to its conclusion. It was when I was two-thirds of the way through the second book that I decided Le Carré’s prose is indeed sublime, and that he must be the outstanding novelist working in Britain today. But within a few pages, as he plunged into one of those interminable confrontations and questionings that he has always specialized in, I had begun to change my mind, Our Kind of Traitor begins when a young British couple holidaying in Antigua run into a very odd Russian fellow, who follows up their brief acquaintance when they both go to Europe. The man has a team around him, although their function is never entirely clear, but eventually the fellow is persuaded to climb in board a plane headed for London, and surrender, with all his information, to the British Secret Service, who are salivating at the idea of interrogating him. There is a final denouement that sends the story into a sort of comic tragedy, a sort of Le Carré speciality, one might say.

Long Lost, by Harlan Coben: This writer began with a series of amusing books about his hero, a retired basketball player turned agent, and parttime investigator, called Myron Bolitar. He has since branched out into more substantial books, but in this he revives Myron Bolitar, a character who has always been supported by a strange, brilliant, violent sidekick called Win, who can always be depended upon to rescue Myron from his worst mistakes. This one is about an old girl friend of Myron’s who has disappeared for some years, but suddenly summons Myron to Paris to help her with something. Myron, of course, agrees to go, and he begins to learn the complex truth about his girl friend’s life, including that she once had a daughter who was killed in a motor accident (for which the mother blames herself), although it appears that this girl might be still alive. It turns out she is not alive, but a girl who looked very like her was created by a sinister cult who wanted unquestioning acolytes and created them from the beginning. An odd book, with a plot that gets too involved in the last few pages, when it becomes difficult to understand it.

The Tin Roof Blowdown, by James Lee Burke: I have long thought Burke one of the finest writers of English at work today. He has created a gallery of characters notable for their humanity, the fact that they are neither good nor bad but a little of both, and by their complexity. His detective, Dave Robicheaux is one of these complex characters, subject to unreasonable rages and spells of irrationality, but always interesting. He uses the destroyed city of New Orleans as the scene for this latest tale, which is, as usual with this writer, worth reading just for the pleasure of his prose.